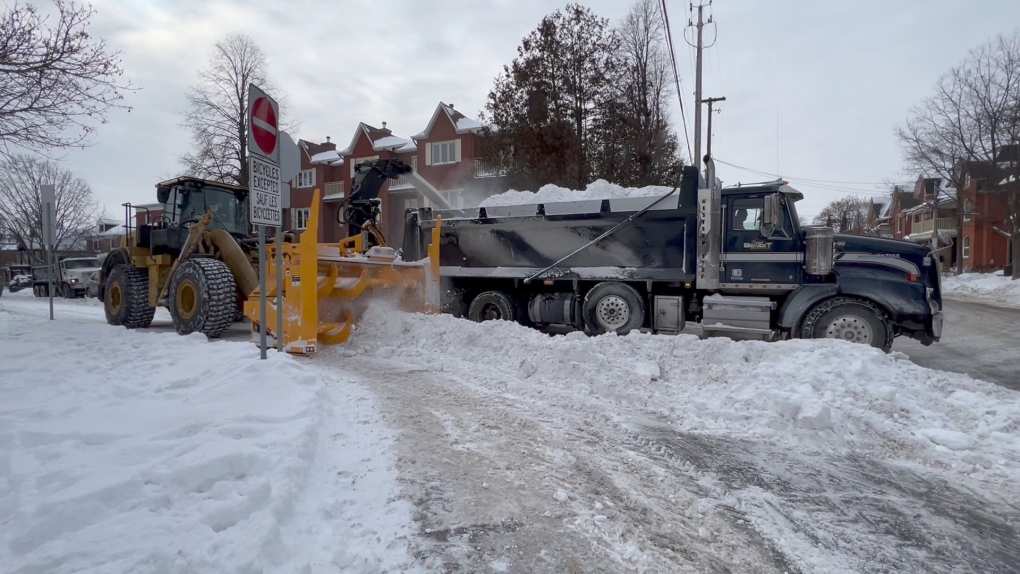 It was one of the biggest snowfalls in years and took days to clear the streets. Now, it’s time to get rid of all the snow.

This week, city crews are hard at work removing those massive snowbanks off the side of the road.

“It’s the biggest one in the last five years that we’ve had,” said Bryden Denyes, the city of Ottawa’s area manager, urban roads.

Today, a lot of it still sits on the side of residential streets.

“It was definitely a challenging storm to get through,” says Denyes. “There was a lot of snow that came down. And then we had another storm right after. It took a little while to get stuff treated, but we’ve got everything open up now and now we’re doing the final cleanup.”

Denyes is in charge of making sure everyone can get from A to B as safely as possible during these tough winter months. His crew on Monday was filling trucks with thousands of pounds of snow, clearing each street one by one of what remains of the storm.

“We started our full snow removal operations this past night,” he said. “And it will be ongoing for at least two weeks, maybe a bit longer depending on weather conditions. If we have any more snow, obviously we have to switch to treating the storm versus snow removal. But it’s going quite well so far.”

Work follows the city’s road and sidewalk classification system. They start with priority roadways and then work down to residential areas.

If you see temporary no parking signs in your neighbourhood, keep vehicles clear of snowbanks during the posted times.

“If your vehicle is still there when we show up to do our work, we will move those vehicles to a close side street that has either been removed already, or hasn’t been,” Denyes said. “But you will also receive a ticket for impeding snow removal operations.”

Multiple crews were out in the downtown urban area on Monday. Smaller side streets should see crews beginning next week. The city is asking residents for their patients as they work as quickly as possible.

“Depending on the streets that they’re assigned to, crew size can vary,” says Denyes. “But typically the crews consist of the big snow blower, typically two graders that pull the snow. A couple sidewalk machines and anywhere from eight to sixteen trucks to haul the snow.”

All this snow will be taken to one of the city’s seven engineered snow disposal facilities across the city.