Ottawa residents who lined up at LCBO stores hoping to get free rapid tests on Friday found that none were immediately available, but some locations began handing them out later Friday morning.

The LCBO said on its website Thursday that free rapid take-home kits would be available "beginning Friday, December 17th" at 100 locations across the province, including seven in Ottawa.

When people arrived at the stores for their 9 a.m. openings, there were no tests to be found at any of the seven locations.

Hundreds of people lined up at the stores hoping to nab the free tests, which have become a hot commodity ahead of the holiday season with the surging Omicron variant of COVID-19.

Store employees told people in line at several of the locations they did know when the tests would be arriving. At the Bank and Walkley location, an employee stood outside with a cardboard sign reading "We do not have tests yet, sorry."

But later Friday morning, several of the stores began handing them out.

“My sister-in-law has cancer and we are going to Toronto for Christmas,” said Norma Greenway, who picked up a kit at the Rideau and King Edward LCBO. “We are triple-vaxxed, but this is an extra layer.”

At the LCBO at Strandherd and Greenbank in Barrhaven, a store staff member told people waiting that they were expecting to receive up to 2,000 kits sometime Friday.

Mary Ellen Kelly, the first person in line at the store, arrived at 6:40 a.m. Friday, armed with a lawn chair, a blanket and wearing a few layers under her coat.

Kelly said she wasn’t sure how long she would wait for the rapid tests to arrive.

“I guess there will be a moment when I either I can’t just take the cold much longer or just finally have to give up that they haven’t arrived yet.”

Denise Rose, the second person in line, said she arrived shortly after 7 a.m.

“We’re all pretty cold so every hour I’m going in and I warm up, I buy a bottle of wine and I come back out,” she said. “When I’m all done and I have my test I’ll go home and have a glass of wine.”

An official in Premier Doug Ford's office said the LCBO began shipping the tests to the 100 stores Friday morning.

An allocation of COVID-19 rapid tests kits are starting to be available on a first-come, first-served basis at select LCBO stores today. We expect stores will receive supplies today, but cannot confirm arrival times at each location and do expect our limited supply to go quickly.

The seven stores the LCBO had said would have rapid tests are:

The LCBO said the Rideau and Innes Road locations both ran out of rapid tests around noon.

The plan to distribute free tests through LCBO locations is part of the Ontario government’s holiday testing blitz as the Omicron variant of COVID-19 takes hold and cases rise. 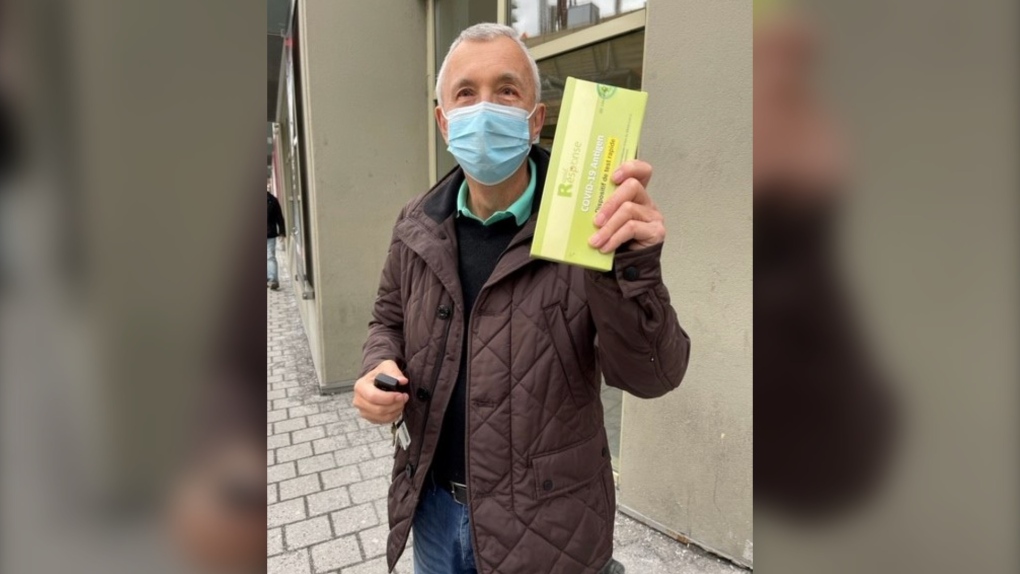 Allan Fenske was able to get a rapid test at the LCBO on Rideau Street Friday morning. (Graham Richardson/CTV News Ottawa)

Along with the LCBOs, the province has chosen 10 pop-up sites in Ottawa to distribute rapid tests, medical officer of health Dr. Vera Etches said Thursday.

However, those tests aren’t expected to arrive until Dec. 21.

You can view a full list of the first 100 LCBO stores due to get rapid tests here.