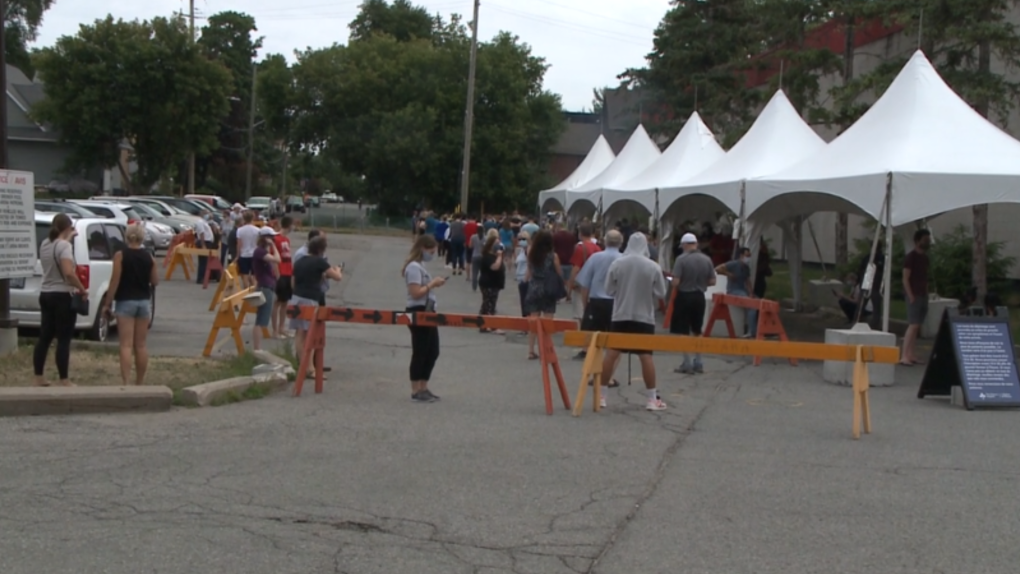 Residents of Ottawa line up to be tested for COVID-19 at the assessment centre at the Brewer Arena, July 30, 2020. (Mike Merserau / CTV News Ottawa)

OTTAWA -- In the past month, the COVID-19 picture in Ottawa has shifted.

Younger residents increasingly contracted the virus and case numbers began to rise again after a flattened curve in June. Some public health orders were relaxed, as Ottawa moved from Stage 2 to Stage 3 of Ontario's reopening framework. Other measures were put in place, including mandatory masks.

July began much like how June ended. New case reports were in the single digits, hospitalizations were low, and no one had died. Summer had arrived and some life was coming back to local businesses that were allowed to reopen patios and later attract customers indoors again.

However, as the month wore on, the numbers began to climb. The first spike, such as it was, was reported on July 11, when 16 new cases were recorded. It was the highest number of new cases in a day the city had seen since the end of May, but Ottawa Public Health said some of that was due to a lag in reporting and the figure represented a period of more than 24 hours. Three cases were reported the next day.

One week later, a double-digit increase of 19 new cases started a trend that would continue through to the end of the month.

Ottawa's medical officer of health, Dr. Vera Etches, told CTV News at Six that evening that parties earlier in the month were to blame for some of the sudden rise in cases. That messaging about parties would be repeated by Ottawa Public Health through to the end of July, as cases in partygoers led to cases in their family members and other close contacts.

The largest increase of the month came on July 21, when the city saw 43 new cases in a single day. That was the highest number since the beginning of May, when the curve had only just started to flatten. This time, the curve was steadily rising upwards. Active cases, institutional outbreaks, and hospitalizations were all increasing.

On July 28, OPH reported the first COVID-19 linked death in more than a month. A man in his 40s passed away the day before. He is the second youngest in Ottawa to die of COVID-19. The youngest was 39.

On July 30, we would learn of a 16-year-old admitted to intensive care with COVID-19, the youngest known ICU patient in the capital with the disease.

There were 445 new cases of COVID-19 reported in Ottawa in July. That number falls between the numbers of new cases in May and June. May saw 590 new cases, while June saw 132.

July's increase in cases started early in the month. As Ottawa Public Health data show, the rolling seven-day average for new cases began increasing around July 5 and ramped up dramatically by July 10.

July 10 was the bottom of the previous curve, when it comes to active cases. On that day, there were just 40 known, active cases of COVID-19 in the city. By July 31, there would be 250, though the high for the month of 271 was recorded a day earlier.

Testing has remained relatively high, with laboratories consistently returning hundreds of results per day and, in some cases, more than 1,000. OPH says one per cent of tests came back positive from July 21-27. The daily percentage of positive tests is typically at or below one per cent, though there was spike to 2.7 per cent on July 19, from 0.8 per cent the day before. On July 20, 1.4 per cent of tests reported on the OPH dashboard were positive.

July saw a shift in the demographic breakdown of COVID-19 in Ottawa, as younger residents increasingly contracted the virus.

Data from Ottawa Public Health show that by the end of July, residents in their 20s accounted for the largest proportion of all 2,539 COVID-19 cases reported up to that point. That age group accounted for 15.7 per cent of all laboratory-confirmed COVID-19 cases in the city. While that number is roughly equivalent to their share of the total population of Ottawa, it has risen significantly in the past month.

At the end of June, people in their 20s accounted for 12.7 per cent of all lab-confirmed cases up to that point. Between the end of June and the end of July, 134 cases of COVID-19 would be confirmed in residents age 20-29, just two more than the total number of cases reported in all of June across all age groups in the city.

Cases by age and month
Infogram

The number of children affected by COVID-19 also increased significantly in July. Cases doubled in residents 19 and under. There were 33 cases in children under 10 at the end of June, and 66 in the 10-19 set. By the end of July, those numbers would jump to 72 and 134, respectively.

The disease has primarily, and disproportionately, affected older residents. Up until July, people 50 and older accounted for a majority of the confirmed cases in the city. At the end of June, 56.6 per cent of all cases in Ottawa up to that point had been confirmed in people 50 and older, despite them representing roughly 36 per cent of Ottawa's total population. In July, the split was a solid 50/50, with younger residents likely to take the majority in August.

While April and May were dominated by extensive spread of the virus in the city's long-term care homes, institutional outbreaks were significantly less deadly in June and July. Long-term care and retirement home outbreaks often ended with few cases and even fewer deaths. What changed in July was the introduction of outbreak measures at childcare centres. By the end of July, there were five active outbreaks in local childcare centres.

The number of people in hospital with COVID-19 has risen in July, but remains low compared to past months.

July started much like how June ended, with just three people in the hospital with COVID-19. June's curve flattening saw the number of hospitalizations drop from 38 at the start of the month down to three by the end. May peaked at 55 people in hospital.

When cases first started rising in July, Dr. Etches linked the spike to private parties and gatherings indoors at the start of the month. As the month went on, close contacts of people who contracted COVID-19 at parties began to test positive.

Dr. Etches and OPH urged a "back to basics" approach to address the rising figures.

"As we go about doing some things, practice physical distancing; please stay home when you're sick; always wear a mask inside while in public spaces and even outdoors when physical distancing is difficult; don't forget to wash your hands; avoid touching your face. We've flattened the curve before, and I know Ottawa has what it takes to do it again," she said on July 30.

In a twitter thread, OPH said the solution was one "we all know."

Ottawa, can we talk about these rising case #'s?

Yes, there is cause for concern. If we don't get a handle on this, it could undermine all the work we’ve done. But while we're seeing new cases, the solution to the issue isn't new. In fact, it's a solution we all know. (1/5)

Learning to live with the virus won't be easy. None of us are perfect. We MUST be #COVIDwise & be mindful of our risks when choosing activities. The rise in cases shows us that our actions affect case #'s. When we take our eyes off the ball, cases rise. It's that simple. (3/5)

We know you can do this because we've already seen you flatten our curve! You've done it before, and you'll do it again. Stay the course. Keep the faith. And we will beat this. OPH out. (5/5)https://t.co/5kSPW03a5U

In a special statement on Ottawa Public Health's website on Friday, Dr. Etches wished everyone a safe, and "social wise" long weekend.

"As we head into the long weekend, I hope you will be able to safely participate in some of the activities that you enjoy with those inside your social circle of the same 10 (or less) people," Dr. Etches said.

"I want to remind people that private gatherings (e.g. parties, get togethers) are considered a high-risk activity when doing so with those outside your social circle. If you are going to be participating in such an activity this weekend with people outside your social circle, please assess your risk and ask yourself how you can make the activity safer. This means keeping visits shorter and outdoors, wearing a mask inside and outside if you can’t physically distance, washing your hands often and avoiding touching your face. Make it a habit to carry hand sanitizer in your pocket or your purse. Avoid sharing food or drinks – bring your own. Avoid handshakes and embracing others. If you’re uncomfortable, leave. And if you’re sick, please stay home."