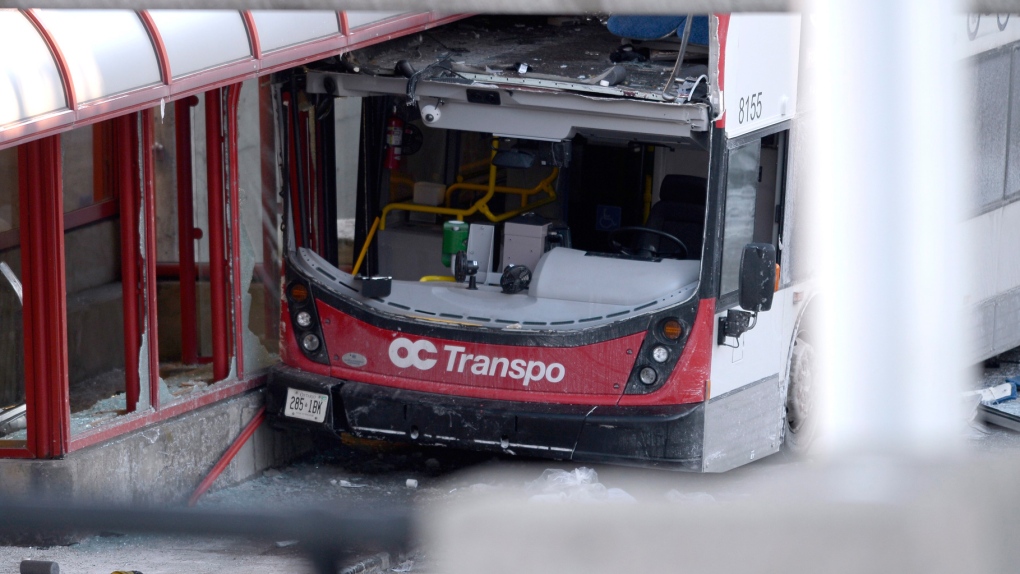 A double-decker city bus that struck a transit shelter at the start of the afternoon rush hour on Friday, remains in place at Westboro Station in Ottawa, on Saturday, Jan. 12, 2019. THE CANADIAN PRESS/Justin Tang

OTTAWA -- The Ontario Superior Court has rejected certification of a proposed class action lawsuit stemming from the 2019 Westboro bus crash.

The collision at the OC Transpo station on Jan. 11, 2019 claimed three lives and injured many more.

The proposed class action was one of 22 formal statements of claim related to the deadly tragedy.

In a memo to City Council, City Solicitor David White said the judge, Justice Calum MacLeod, ruled that this case does not qualify for class action status.

"As a result of the City's considered approach to the other claims, and noting the class action plaintiff's desire to advance broad allegations of systemic negligence, the Court determined that there were, in effect, no advantages to having the lawsuit proceed as a class action," White wrote. "The Court noted, in this regard, that '[C]lass proceedings are not to be used to needlessly inflate tragic accidents into public spectacles.'"

In his decision, Justice MacLeod said the proposed class action was "structured in a peculiar fashion", noting that the bus driver is not named in the suit, nor is the City being sued for vicarious liability as the employer of the driver or for its statutory liability as the owner of the vehicle.

"I do not consider this particular pleading to be an appropriate vehicle for a class proceeding," MacLeod wrote. "Ever if that alone is not fatal to the motion, I am not satisfied on the evidence before me that a class proceeding is either necessary or in the interests of justice."

White noted that the City admitted liability for losses stemming from the crash in its handling of individual court actions, which is something MacLeod took into account.

The plaintiff who filed the proposed suit has until April 23 to convert the lawsuit to an individual action or amend the claim and seek class action certification again.

White said the City would be making submissions for its legal costs, "in an amount to be determined."