Residents frustrated with the 17-day "Freedom Convoy" occupation in downtown Ottawa took to the streets on Sunday, blocking vehicle convoys from joining hundreds of trucks, vehicles and people on Parliament Hill.

Vehicles in the "Blue Collar Convoy" rolling into the downtown core from the Ottawa Baseball Stadium and the west end were greeted by human blockades at several intersections.

"We don't want to see them come through our community so it's time to take a stand," Andrea Harden said.

A Facebook page said the "Blue Collar Convoy" was, "Blue-collar workers coming together in support of Freedom Convoy and farm convoy against mandates." The plan was to join hundreds of vehicles parked on Wellington Street and on several streets around downtown Ottawa as part of the demonstration against COVID-19 mandates.

Shortly after 9 a.m. a few dozen people blocked Riverside Drive at Bank Street to stop the convoy from turning right on Bank Street. By 12 p.m., hundreds of counter-protesters were at the intersection to block traffic.

"We cannot allow more of these trucks to go downtown and join the lawlessness that's already happening there," Harden said.

Word of the planned blockade spread through Facebook groups, as residents braved an extreme cold warning to send a message about the actions of police, government officials and demonstrators during the 17-day protest downtown.

"It's a chance for us to vocalize our feelings and a bit of frustration in regards to the event itself," Scott Bradley said.

Jen Roger added, "I'm tired of these truckers and other people taking over our city."

Municipal and provincial politicians attended the rally to support constituents.

"I believe in this city and I believe in this neighbourhood in particular. I know this got put together in a Facebook group for dog walking, cookouts and kid meet-ups, so, look, that should tell the authorities people are fed up. We want action," Ottawa Centre MPP Joel Harden said.

"The convoy needs to go, you've made your point, we hear you. We're upset too, no one likes the moment we're in."

Ottawa police officers were on the scene to monitor traffic throughout the day.

"We're all angry, we're all upset," said one person on Riverside Drive.

Coun. Jeff Leiper reported shortly after 4 p.m. that counter-demonstrators were slowly allowing the convoy vehicles to leave the intersection one at a time. As of 6 p.m., Riverside Drive was open to traffic at Bank Street.

We blocked the convoy in our neighbourhood this morning at Riverside at Bank. We started with about 25 people with hundreds more who have joined in solidarity. We made sure residents could get through but kept the convoy here. #Ottawa #OttawaOccupied #Ottnews pic.twitter.com/P4654gUwcQ

Several residents also gathered at the intersection of Elgin Street and Argyle, outside the Ottawa Police headquarters, to block convoy vehicles from travelling to Parliament Hill on Sunday

CTV News reporter Mackenzie Gray reported one car got through the crowd and pushed a counter-protester forward Sunday morning before stopping.

At the corner of Elgin and Argyle, counter protestors tried to stop some pickup trucks from getting through.

One car got through the crowd and pushed a counter protester forward before stopping.

Limited urgency from the cops to handle the situation #cdnpoli #ottnews pic.twitter.com/TOdFIekPdb 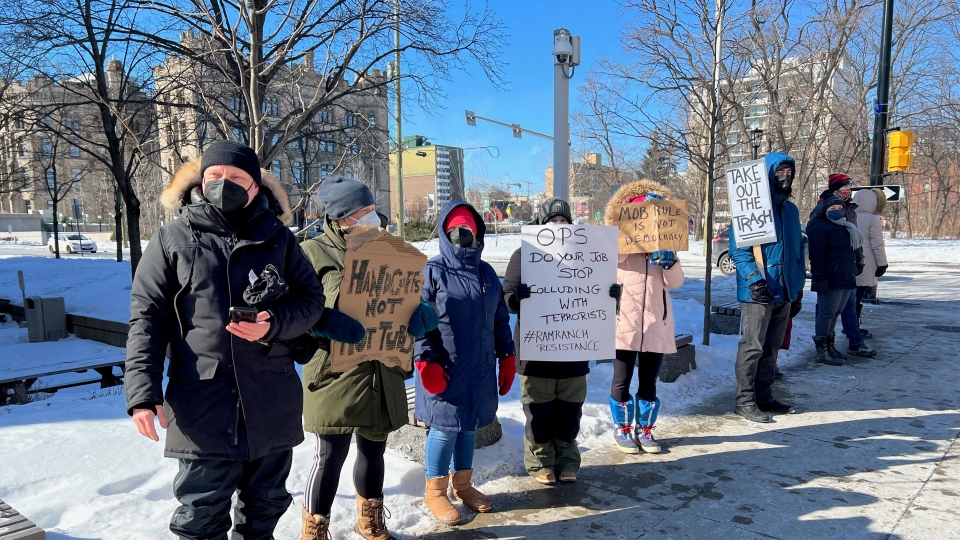 Council will meet Tuesday to discuss the ongoing demonstration and blockade in downtown Ottawa. Councillors will receive an update from the Ottawa Police Service, as well as the city's legal department about a possible injunction.

"At the very least we need the federal government to step in and take control of the area that they should be responsible for, the Parliamentary Precinct."

McKenney says they are not pointing fingers, but wants leaders to come together to end this demonstration.

"Every weekend is more dangerous than the last, we cannot have another weekend in our residential neighbourhoods with this much lawlessness, we just can’t."

"We’re not being informed, we have no clue what’s going on, and we just need to know that there’s a plan," Tierney said. "It’s actually gotten past that point, I think we have a major concern. I’ve heard from people in the force that actually want to start accomplishing things as well but it’s all directed by the chief and by the executive and Police Services Board and we need to see something start to happen soon. "

Tierney says after residents saw police move in to end the blockade at the Ambassador Bridge in Windsor, they're hoping for enforcement in Ottawa.

In a letter to constituents on Sunday, Coun. Glen Gower said he shared the concerns and frustrations of many residents about the "slow response" by police.

"It’s clear to me that police still don’t have enough resources to quickly bring this to an end. This occupation is well-organized and well-financed, and it remains a volatile situation," Gower said.

Gower is urging residents to contact their MP and MPP to express the urgency of the situation and ask for help to end the occupation.

Coun. Carol Anne Meehan, a member of the Ottawa Police Services Board, called on Prime Minister Justin Trudeau to "step up."

"The nightmare in downtown Ottawa must end.  The damage being inflicted is beyond anything the occupiers are protesting," Meehan said on Twitter. "@JustinTrudeau must step up. We need a leader!"

Council was originally scheduled to meet at 1 p.m. Monday. The city announced Sunday evening the meeting will be held on Tuesday.