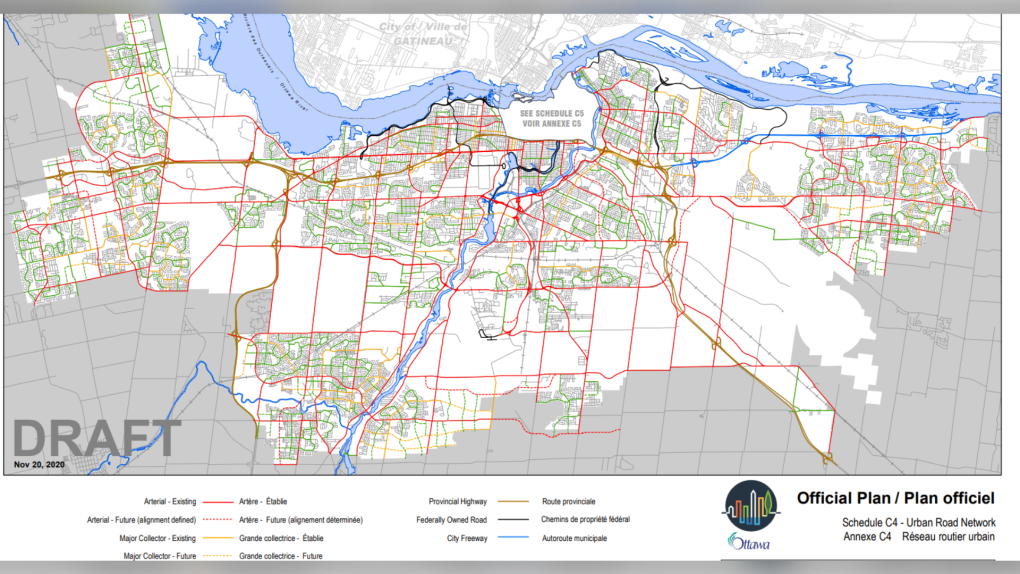 OTTAWA -- An Ottawa city councillor wants to hit the brakes on a proposed four-lane transportation corridor running through his ward outlined in Ottawa's Official Plan.

The full draft of the Official Plan outlines the "Alta Vista Transportation Corridor" as a future arterial road running through Alta Vista and Capital wards. The proposed route runs from Conroy and Walkley Roads, winds through the green transportation and utility corridor behind the Ottawa Hospital and CHEO, ending at the Nicholas Street on-ramp.

The Secondary Plan for Alta Vista/Faircrest Heights and Riverpark states the Alta Vista Transportation Corridor is planned to be a "major transportation corridor."

"First proposed over half a century ago, it's an antiquated scheme to funnel vehicles from outlying areas to the core," Menard said on his website. "In the decades since, the city has evolved. We have declared a climate emergency. We understand the value of 15-minute neighbourhoods. And we are investing heavily in transit and intensification downtown."

The AVTC is a proposed ~$250 million four-lane freeway running through greenspace from Walkley near Conroy to the Nicholas on-ramp between Old #Ottawa East and Sandy Hill. Proposed half a century ago, it’s an antiquated scheme that won’t work. Take action: https://t.co/hjLiNpAotL

Menard says the proposed four-lane road would pave over the equivalent of 187 football fields, which residents use for walking, community gardens and competitive sports. He adds building a roadway through green space is "antithetical" to the climate change emergency declared by the city and the goals to promote active transportation and public transportation.

Menard is encouraging people to write the city and urge them to remove the Alta Vista Transportation Corridor from the draft Official Plan.

Ottawa's Official Plan outlines the city's goals, objectives and policies to guide growth and manage physical change until 2046. It also implements the priorities identified in Ottawa's Strategic Plan as they relate to land use.

A report will be presented to a joint meeting of the planning committee and agriculture and rural affairs committee in the spring. Council is scheduled to consider the draft new Official Plan in the fall of 2021.

Former Coun. Alex Cullen, now president of the Federation of Citizens' Association of Ottawa, sent a letter to Mayor Watson this week calling on the city to delay the Official Plan review until 2023.