Convicted murderer to be sentenced in Picton 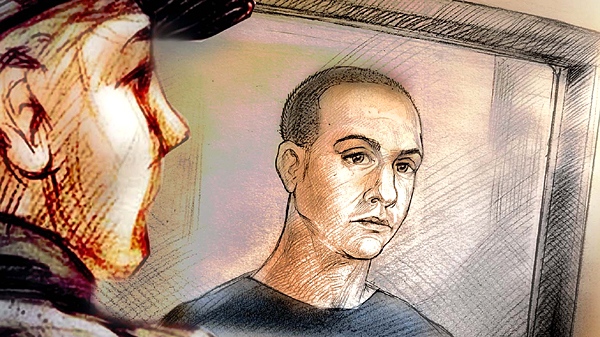 In this courtroom sketch, Dean Brown makes a brief appearance via video link in a Kingston, Ont., court to face first-degree murder charges on Saturday, March 13, 2010.

PICTON, Ont. - It's expected to be an emotional day in a Picton courtroom as the sentencing hearing for Dean Brown gets underway.

The 20-year-old Belleville man was convicted Wednesday of the first-degree murders of 46-year-old Tracy Hannah and her 14-year-old daughter Whitney.

He was also convicted of the attempted murder of his ex-girlfriend Shannon Hannah.

Brown shot all three women in their Mountainview home, south of Belleville, in March of last year.

Victim impact statements will be read out in the courtroom today before Brown is sentenced.

First-degree murder convictions carry life behind bars with no chance of parole for 25 years.