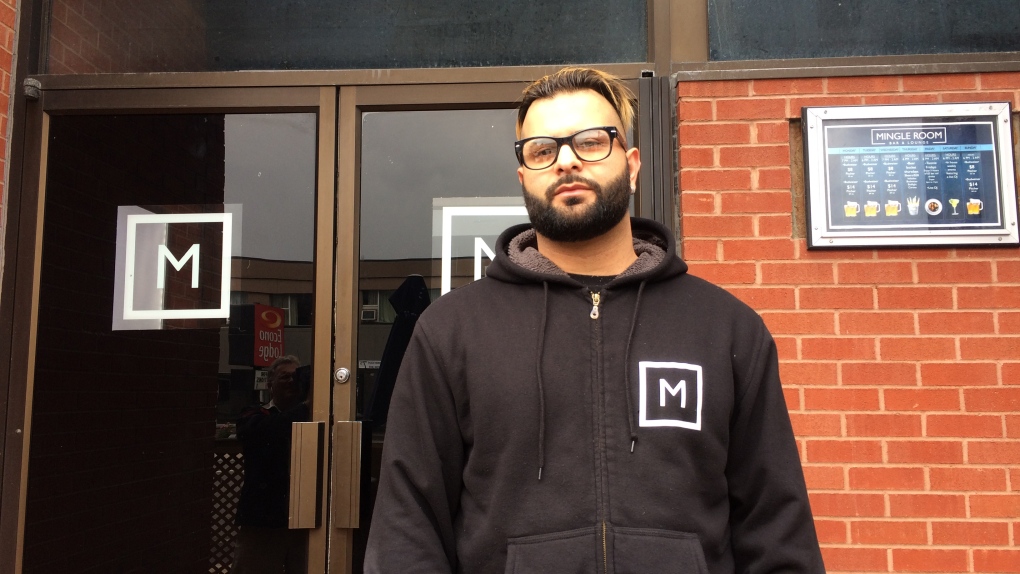 Mingle Room manager Ardy Rahmani had said there was no way a weapon could make it inside the establishment. The club closed for good on Monday.

A downtown Ottawa night club, where a man was murdered last month has been shut down. The bar's operator has been evicted. This is not the first business where there's been violence to be forced to close.

Ashton Dickson's photo still adorns the pole outside the Mingle Room.  What appears to be a bullet hole is visible in the window of the bar, and so, too, is a sign announcing the bar is closed.

The door is locked and the bar empty after the owner of the building evicted the operator of the Mingle Room over the weekend.

The sign on the door spells it out, that "due to some changes, Mingle Room is now closed."

For the councillor for this area, the closure is a victory, after several violent encounters at the Mingle Room in the last few months, including shootings, stabbings and Ashton Dickson's murder last month.

“It was a relatively quiet place for years,” explains Mathieu Fleury, the Ottawa councillor for the area, “then it really picked up in terms of night uses, gang gatherings.”

25-year-old Ashton Dickson was a rising football star with dreams of the CFL. An altercation inside the Mingle Room escalated into his murder outside the bar.

Just last Thursday, friends and family members held the vigil at the spot he died. Through all this, the bar's operator has denied any culpability.

“My bar is not responsible for the actions of individuals on the street,” explained Ardy Rahmani in an interview he did with CTV Ottawa a day after Dickson’s murder.

The city, anxious to act on community concerns, started looking at building permits, public health issues, anything to shut it down.

Fleury explains that even though the Mingle Room had been operating for about 4 years, it had originally opened as a restaurant.

The property owner agreed with that interpretation and evicted the operator of the bar.

The owner of the property, according to Fleury, also owns the Shawarma Palace next door to the Mingle Room, which they have owned for years. The building used to house a Korean restaurant until it changed hands and became the Mingle Room.

This isn't the first bar to close under pressure after some violent incidents.  The Vibe Lounge closed earlier this year after complaints about underage drinking and drug use. And the Suya Spot shut down last year after several shootings outside its doors.

The Mingle Room's closure brings relief to residents in the area who worried about the potential for more violence here.

“I’m actually excited about it closing,” says Jocelyn Hoskins who lives blocks away from the Mingle Room, “I think maybe it will reduce some of the stuff that happens in this area  but there's no guarantee right?”

Fleury hopes the building will re-open as a restaurant, something that the community can enjoy.

The organizer of the vigil says they just take comfort the Mingle Room is closed for good.