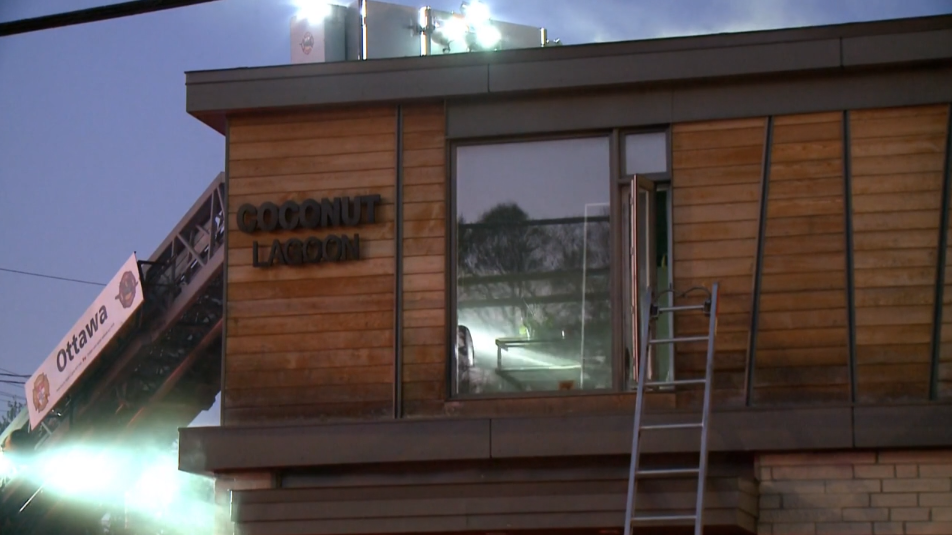 Ottawa firefighters respond to a fire at the apartment above the Coconut Lagoon restaurant on St. Laurent Boulevard May 22, 2020.

OTTAWA -- A local restaurant has been severely damaged by fire after a blaze broke out in the upstairs apartment.

The fire broke out in an apartment above the restaurant.

Ottawa Paramedics said all occupants were out of the building before emergency crews arrived. One firefighter was later treated for injuries.

Coconut Lagoon owner Joe Thottungal told CTV News on Saturday he had already left for the day when the manager who was working at the time called him at around 7:45 to tell him about the fire.

"It's like my baby, and it's been hurt, you know?" Thottungal said. "I was driving around Dow's Lake, showing the tulips to my family when I heard the restaurant was on fire. I came off the 417 and seeing the smoke—my heart, I could not believe it was happening to my place."

The restaurant has been severely damaged and will need to be gutted and repaired. The outside looks all right, but inside, it's like "a warzone" Thottungal said.

"This is a nightmare for every chef, when it comes, and this was during this pandemic time. It was going very well, there were no issues, and we were feeding the people. It was heartbreaking," he said.

Thottungal says he plans to cook again and vows to come back stronger than ever.

"Without this community, I wouldn't be anything," he said. "I thank the Ottawa community to support us. This is my word: my baby got hurt, but we will come back strong and, with your support, we can put back everything. My staff is alive and safe and we will continue our good work from Thali."

Thottungal says the Coconut Lagoon menu will be served from his restaurant Thali, on O'Connor Street for the time being.