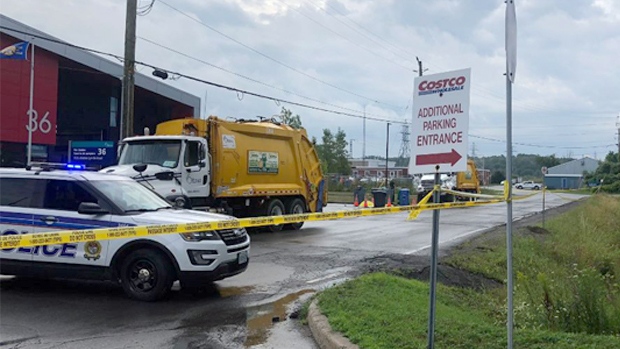 A man has died after a workplace incident in the city's east end early Monday morning. (Photo: Megan Shaw)

A city of Ottawa employee has died after he was pinned between two garbage trucks in the east end.

“Two garbage trucks were involved in a collision, a male was working between the two trucks when he was struck, he was pronounced deceased,” said Det.-Const. Kevin Bradford.

Ottawa Paramedics say the man, who is in his 50s, suffered ‘crush injuries’ to his lower body.

It happened around 7a.m. on Cyrville Rd. Ottawa Police and the Ministry of Labour are both investigating.

“First and foremost, I extend my deepest sympathies to the family, friends and colleagues of our employee. Today is an extremely difficult day for those who are affected by this tragic incident," Levesque said via e-mail to CTV News.

“The City is providing support to its employees through the Employee Assistance Program.”

The city also announced that the flags at all City of Ottawa sites would be lowered to half-mast to mourn the employee.