City of Ottawa says it has filled 92-hundred potholes since January 1; more to come 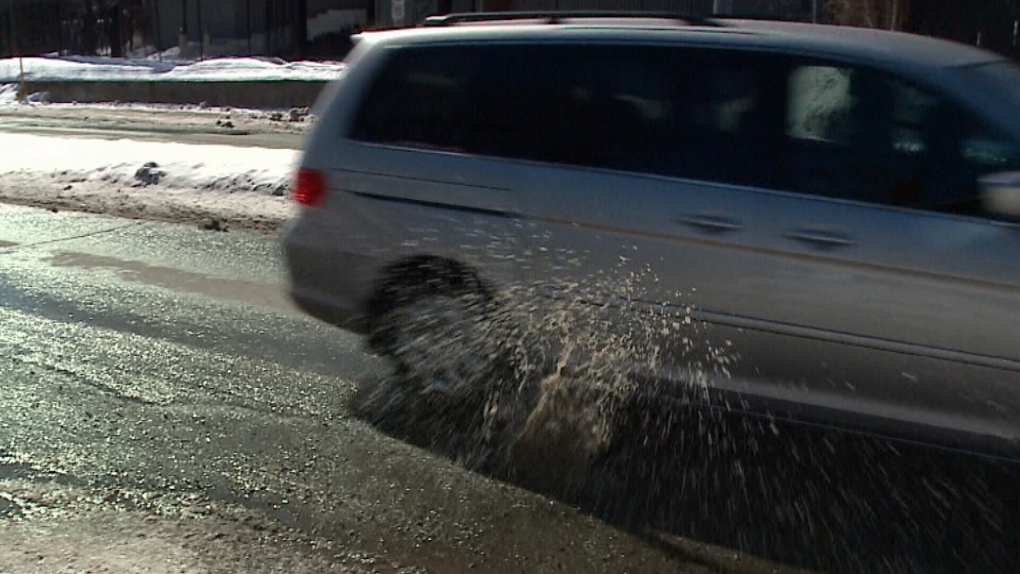 Crews are out today filling potholes in anticipation of tomorrow's snowstorm.  According to the city of Ottawa, since the start of this year, workers have filled more than 9-thousand potholes, thanks to a crazy season of freeze and thaw.

To date this winter season, we've had 76 hours of freezing rain.  That's on top of our record snowfall for January.  And that takes its toll on our roads and clearly, on our cars.

There's the zig and the zag, as cars and trucks try to dodge the city’s numerous potholes. Then there's the full-on air launch, from those who don’t see them in time.

“They're pretty awful,” says one driver, “It messes up your car quite a bit, doing zig zags all over the road to avoid them and then you get honked at by people because they think you can't drive.”

But driving takes on a new challenge when you're playing pac man down our city streets.

The city says they are doing something about it but the fact is, those same potholes keep “popping up" especially with the winter we’ve had: 216 cm of snow along with 76 hours of freezing rain.  Top that off with 35 freeze/thaw cycles, according to statistics from the city of Ottawa. The city says since January, it's already filled 92-hundred potholes.

It just doesn't feel that way.

“If you're going around a corner and you don't see it,” says driver Yvonne Falardeau, “and your wheels are turned and you it the pothole, it could jar anything.”

That's exactly what's happening. Sandra Giaccone is with Frisby Tire on Clyde Avenue, “Here’s a typical wheel that hit a pothole,” he says, as he shows CTV Ottawa a rim, “and this was significant because it bent both sides of the wheel at the same time.’’

It is damage that can cost hundreds of dollars to replace rims or repair suspensions.

“If there's something different about your car after you hit a pothole,” says Giaccone, “it a good idea to get it checked.”

At least on a day like this, you can see the potholes but come Tuesday or Wednesday, they'll be buried in snow or water, then it's anyone's guess where they are.

Some councillors say if it isn't potholes they're dealing with it's ice ruts like these that can also wreck your car.

“So now it's just as bumpy as if it were potholes,” says Ottawa city councilor Theresa Kavanagh, “That's what we're dealing with now. They're frozen solid on the roads and I don't know how we're going to deal with that with the forecast we just saw. It’s going to be crazy.”

The best advice, says Giaccone, is not to follow too closely behind another vehicle. You know if the car ahead of you takes a significant dip down there's a pothole ahead.  Slow down and try to avoid it.