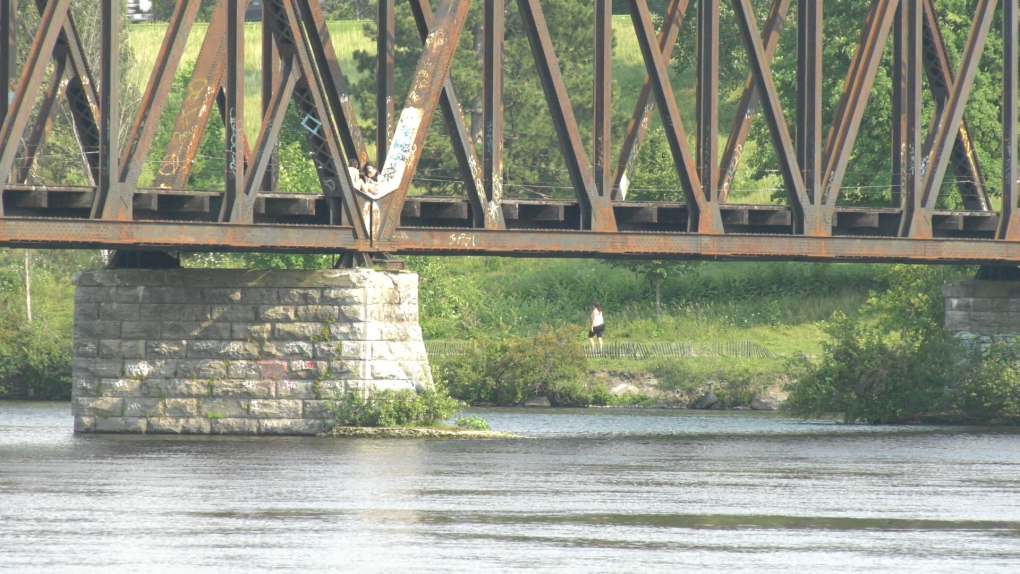 The federal government is investing $8.6 million for a new pathway on the William Commanda Bridge over the Ottawa River. (Jackie Perez/CTV News Ottawa)
OTTAWA -

The long-awaited multi-use pathway connecting Ottawa and Gatineau through Lemieux Island will go ahead, good news for cyclists and pedestrians travelling along the Ottawa River.

On Monday, the city of Ottawa and the federal government announced construction will begin this year on the defunct bridge formerly known as the Prince of Wales Bridge.

“I was happy when I heard the news,” said cyclist Khanh Nguyen.

“It (will) be nice to be able to bike there quickly,” said Jim Bennett-Ross, referring to crossing the river to Gatineau.

The bridge is currently off-limits to the public, but it will become another option to travel between the two provinces.

“It’s another way for residents and tourists alike to travel between the two cities on a designated path for cyclists and pedestrians and in the winter time cross-country skiing,” said Mayor Jim Watson.

For Ottawa resident James Hearn, the bridge upgrade creates another option while walking his 11 week-old puppy.

“It certainly allows it to be easier for people in both sides to transport back and forth,” he said.

Expected to open in 2022, the project is estimated to cost $22.6 million. The federal government will commit $8.6 million to the project.

Despite being off limits and following repeated warnings, the bridge has been used by some to jump into the river below. In the past year alone, two people drowned in the river at the Prince of Wales Bridge.

Part of the city’s plan to upgrade the 140-year-old bridge will include new railings for added safety, new lighting and 12 new benches that will serve as rest areas. It will also feature indigenous art work— dedicating one per cent of construction costs to bring it to life.

While its completion is at least another year away, residents are looking forward to the opening.

“One of the toughest things, we’ve been confined for so long to be able to go outside for a walk over a bridge in a beautiful park is a great thing,” said Hearn.

War wounds: Limbs lost and lives devastated in an instant in Ukraine

There is a cost to war — to the countries that wage it, to the soldiers who fight it, to the civilians who endure it. For nations, territory is gained and lost, and sometimes regained and lost again. But some losses are permanent. Lives lost can never be regained. Nor can limbs. And so it is in Ukraine.

NATO Secretary-General Jens Stoltenberg said Wednesday that the military alliance stands ready to seize a historic moment and move quickly on allowing Finland and Sweden to join its ranks, after the two countries submitted their membership requests.

NEW THIS MORNING | 'Please' before 'cheese': Answers to your royal etiquette questions

Etiquette expert Julie Blais Comeau answers your questions about how to address the royal couple, how to dress if you're meeting them, and whether or not you can ask for a selfie.

'It's the only option': Some Finns in Canada favour NATO bid

Ukrainian fighters extracted from the last bastion of resistance in Mariupol were taken to a former penal colony in enemy-controlled territory, and a top military official hoped they could be exchanged for Russian prisoners of war. But a Moscow lawmaker said they should be brought to 'justice.'

The Green Party of Canada is calling on the federal government to develop a targeted anti-transgender hate strategy, citing a 'rising tide of hate' both in Canada and abroad. Amita Kuttner, who is Canada's first transgender federal party leader, made the call during a press conference on Parliament Hill on Tuesday.

Former Pentagon officials have briefed at least three Canadian members of Parliament about unidentified flying objects, according to a Manitoba MP and a Texas-based researcher.

Canadians in the dark about how their data is collected and used, report finds

A new report says digital technology has become so widespread at such a rapid pace that Canadians have little idea what information is being collected about them or how it is used.