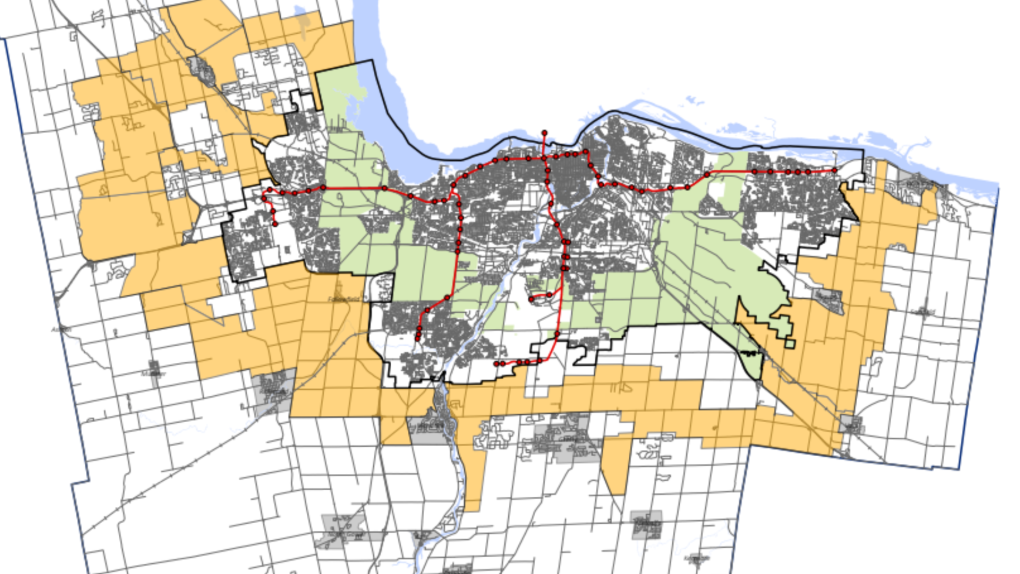 The proposed 'gold belt', in yellow, would be 53,000 hectares of protected land that would create a boundary between Ottawa's suburban communities and rural villages. (Image: City of Ottawa)

OTTAWA -- City councillors have approved several parcels of land on the outer urban edges of the city for new development as part of a future expanded urban boundary.

City Council approved a plan in May 2020 to expand the urban boundary—the area on which new developments may be built—by more than 1,200 hectares between 2021 and 2046.

The committees also voted to add lands to the Algonquins of Ontario and Taggart Group's "Tewin" project, east of Leitrim and west of Carlsbad Springs. "Tewin" is the Algonquin word for "home".

Additionally, the committees also approved the creation of a 53,000 hectare "gold belt", similar to the greenbelt, that would surround Ottawa's suburbs and separate them from rural villages.

"I think if we're serious about reconciliation, we have to take our words—when we talk about land recognition and so on—and put those words into action," Watson said. "One of the ways we can do that is to allow the First Nations to develop a community by their people to create some economic opportunity for individuals from First Nations. I think it's a very innovative, pioneering way for a city to go beyond the traditional land claim statements at the beginning of council meetings and put those words into action."

Watson acknowledged that some development companies were unhappy with the decision and said that there will always be differing opinions, but felt that this is a tangible step toward reconciliation.

"We can't reconciliation without sharing the wealth and not just the crumbs," he added. "I think we're always very good at reading the statement of our respect for First Nations but this will really be the first time the City of Ottawa has done anything of a very substantive and tangible fashion that will allow our First Nations brothers and sisters an opportunity to create some economic growth and opportunity for their people."

The decisions made at the joint committee meeting will be brought before full city council on Feb. 10.