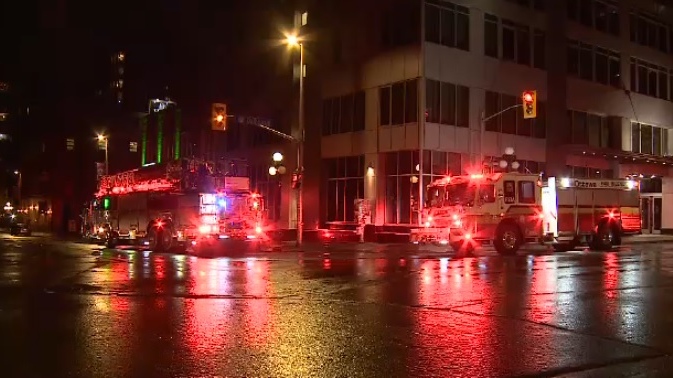 Fire trucks line the street in front of Ottawa's Andaz hotel May 4, 2021.

OTTAWA -- A cigarette in a planter box is getting the blame for a fire atop the Andaz hotel in the ByWard Market.

Flames coming from the roof of the hotel could be seen from highrise windows and balconies surrounding the Market Tuesday night.

My friend just posted these pictures on Facebook of the Andaz Hotel in Ottawa!

I hope everyone is okay! pic.twitter.com/XqzxqqoA9Z

Sirens blared as fire trucks rushed towards the scene. The flames were extinguished quickly. No one was hurt.

Ottawa Fire Public Information Officer Carson Tharris told CTV News Ottawa Wednesday morning that an improperly discarded cigarette in a planter box sparked the blaze. Damage was contained to the furnishings on the patio, at an estimated cost of $30,000.

"The message we want to get out is to remind people to always dispose of cigarettes in a deep ashtray or a metal can filled with sand or water," Tharris said.

Ottawa Fire says dry peat and mulch in a planter can smolder for hours before allowing fire to spread to surrounding structures.