The photograph of Sir Winston Churchill taken from Ottawa’s Chateau Laurier hotel was stolen about eight months ago and replaced with a copy, hotel officials said Tuesday.

The iconic portrait by Canadian photographer Yousuf Karsh is among the most reproduced photographs of the 20th century. Hotel officials discovered over the weekend that it had been taken and replaced by a copy.

On Tuesday, hotel officials said they had analyzed pictures sent in by members of the public with the portrait in the background to determine whether they included the original or the copy. They have established that the photograph was stolen in late 2021 or early 2022, about eight months ago.

“We’ve been able to narrow the date between December 25 and January 6, 2022,”  Geneviève Dumas, the hotel’s general manager, said in an interview. “We have a gap of a few days where this swap actually occurred.”

Over the weekend, hotel officials noticed the photograph was not hung properly. They then discovered the portrait’s frame did not match the other Karsh frames that are hung in the hotel’s reading lounge.

“I’ve been showing this picture almost daily to guests and we could never notice,” Dumas said. “It was done professionally, was very similar to the original.

“I will sincerely ask people if they know anything, hear anything, seen anything, or if somebody tries to sell you that picture, please let us know. We want this picture back. It’s very important to us.”

The photo was taken in December 1941 and is Karsh’s best-known portrait. It remains on the British five-pound note and has graced stamps and magazine covers. 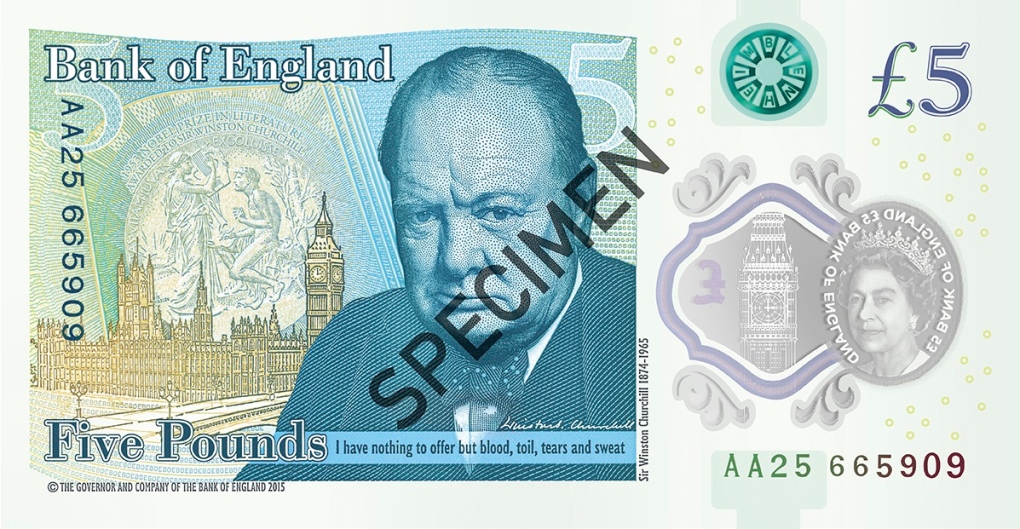 It is known for Churchill’s resolute expression and posture, which many saw as a reflection of wartime feelings in Britain at the time—taking a stand against the encroaching threat of Nazism.

Karsh famously took Churchill’s cigar from him just before the photo session on Parliament Hill, which led the prime minister to scowl at the camera.

Earlier Tuesday, before the timeframe of the theft was established, an art recovery expert said whoever stole the photograph would likely try to sell it quickly, adding the photo could fetch six figures at auction.

Christopher Marinello, the founder and CEO of Art Recovery International and one of the world’s top experts in recovering stolen art, said the thief—or thieves—will likely try to sell the photograph through an auction house that doesn’t do proper due diligence on its source.

“The thief knew what they were doing. This was not a spur of the moment ‘Let me take this off the wall by a guest,” Marinello told Newstalk 580 CFRA’s Ottawa at Work with Graham Richardson. “Somebody had to deal with this in a premeditated fashion.

“The person who stole this is not an art lover, they are not a photography lover,” he added. “They are looking for cash, and they will try to sell it to get that cash.”

Jerry Fielder, the director of Karsh’s estate, said the hotel called him over the weekend and told him they had reason to believe there was a copy photograph up on the wall that had replaced the original.

Fielder asked them to send him a photo of the signature on the portrait, which he instantly saw was a fake.

"I could tell that someone had tried to forge the signature, and I know his signature very well. That confirmed that it was not the original."

Karsh hired Fielder in 1979 as his photographic assistant, and they worked together at Karsh’s studio in the Chateau Laurier for 14 years.

After that, Fielder became his curator, then the director of his estate after he died in 2002.

Fielder and his colleagues at the Karsh estate all reacted with disbelief, he said.

"I just couldn’t believe that this had been done. It’s been there for about 25 years and I never dreamed that this would happen," he said.

Karsh’s widow Estrellita is also "stunned, shocked, amazed and, like all of us, saddened by the fact that it’s been taken," Fielder said.

This particular print of the photograph is special, he said.

Karsh made prints from the negative over the years, but the Chateau Laurier, where he lived for nearly two decades and had his studio from 1972 to 1992, held a dear place in his heart. When the Karhses moved in 1998, Karsh gave a small collection to be put in the hotel’s reading room.

“His association with the hotel was very deep and very warm,” Fielder said. “This was a very special print to him, and it was a really beautiful print. So it does have very special significance.”

Fielder said he couldn’t pinpoint a monetary value of the portrait, only calling it “very valuable.” But Marinello said it could be worth more than $100,000.

“I think the thief knew exactly what they were looking for and will try to monetize it very quickly,” Marinello said.

Many auction houses don’t do proper due diligence on how piece are obtained, happy to collect commissions from the buyer and seller, Marinello said.

“Unfortunately there is a market for this type of thing,” he said. “They will try various auction houses and hoping to find one that does not do sufficient due diligence. And unfortunately, that’s all over.”

With news of the theft spreading to the U.K. and beyond, Fielder is hopeful that with the publicity around the theft, some new information comes forward.

“I’m hoping someone saw something,” he said. “I’m hoping that with all the publicity that’s been generated that it can somehow be recovered and the person or persons can be held responsible.”

Intergovernmental Affairs Minister Dominic LeBlanc says the federal government can't say whether or at what point it may intervene to quash Alberta Premier Danielle Smith's sovereignty act, but that it's not the focus at the moment.