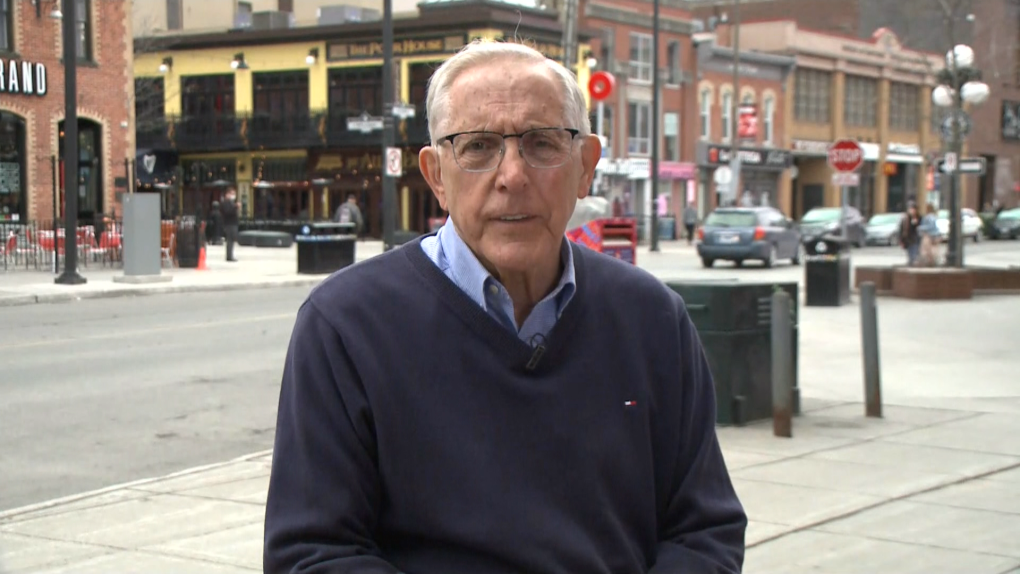 Bob Chiarelli during an interview with CTV News Ottawa after he kicked off his campaign for mayor by registering at the city's elections office Monday, May 2, 2022.

Ottawa mayoral candidate Bob Chiarelli says, if elected mayor this fall, he would work towards increasing the city’s housing stock, but would do so without “killing off Ottawa’s single-family neighbourhoods.”

Chiarelli said in a news release Monday that his plan would increase intensification (that is, building more housing units in smaller spaces; effectively building up instead of out) in a way that does not “destroy” single-family neighbourhoods.

“Intensification is mandated by the Province, but there are better ways of doing it,” he said.

“I would encourage building housing on available City land, including around transit stations. The City should seek new opportunities to sell air rights and build housing above City-owned property. The City should prioritize intensification/redevelopment on acres of one-storey commercial property (and its parking), in preference to trashing existing housing and greenspace.”

He also said he would fast-track approval of adding basement or attic suites to existing homes and would negotiate with the federal government to speed up adding housing to Tunney’s Pasture and Confederation Heights.

However, he was critical of some proposals to encourage affordable housing in large developments.

He said inclusionary zoning, which would mandate a percentage of units in large developments be designated as “affordable” units, is unfair to homebuyers.

He also reiterated a proposal to have the Ontario government return the council-approved Official Plan to the new term of council for a second look. The plan, which charts Ottawa’s growth over the next quarter-century, was approved by city council last year, but the provincial government has yet to provide its approval.

Outgoing mayor Jim Watson said he did not know why the plan has not yet been approved by the provincial government, but added that the elected council approved it with a strong vote well before the end of its term.

“Some have suggested it should be the new council that deals with it. No, this was dealt with by the city seven or eight months ago. Our council has the authority,” Watson told reporters following a council meeting in September. “It’s been submitted, and the minister is going to have to accept, reject or send it back, but we believe it’s a solid document that received a very strong vote of support from over three quarters of members of council.”

The Ministry of Municipal Affairs and Housing told CTV News Ottawa in a statement it is carefully reviewing municipalities' official plans but offered no timeline for when Ottawa's will be complete.

"The Ministry of Municipal Affairs and Housing is carefully reviewing each municipality’s official plan to ensure it best serves the long-term interests of Ontarians," the statement said. "The City of Ottawa will be notified once the review is complete."

Election Day is Oct. 24, but there will be advanced polls open this Friday and next Friday.

Two Mounties who shot a man in his pickup truck at an Alberta rest stop were found not guilty on Friday of manslaughter and aggravated assault.

A security breach linked to Ontario’s COVID-19 vaccine portal exposed the personal information of thousands of people in the province.

An oil spill in a creek in northeastern Kansas this week is the largest for an onshore crude pipeline in more than nine years and by far the biggest in the history of the Keystone pipeline, according to federal data.

Quebec's legislature has passed a law putting an end to the requirement that members swear an oath to the King. The Coalition Avenir Quebec government had tabled a bill on Tuesday making the oath to the monarch optional after three members of the opposition Parti Quebecois refused to swear the oath and were barred from sitting.

The Ikea monkey was spotted 10 years ago. This is where he is now

A monkey cloaked in a tiny shearling coat was found roaming an Ikea in Toronto 10 years ago to date.

Brittney Griner back home in U.S. after Russian prisoner swap

Brittney Griner returned to the United States early Friday, nearly 10 months after the basketball star's detention in Russia made her the most high-profile American jailed abroad and set off a political firestorm.

No decision on landfill search, Winnipeg Police Board considering outside help

Decisions on next steps in a potential search for the remains of two Indigenous women believed to be at a landfill outside Winnipeg are being worked through with the option of bringing in outside help, the city's police board said Friday.