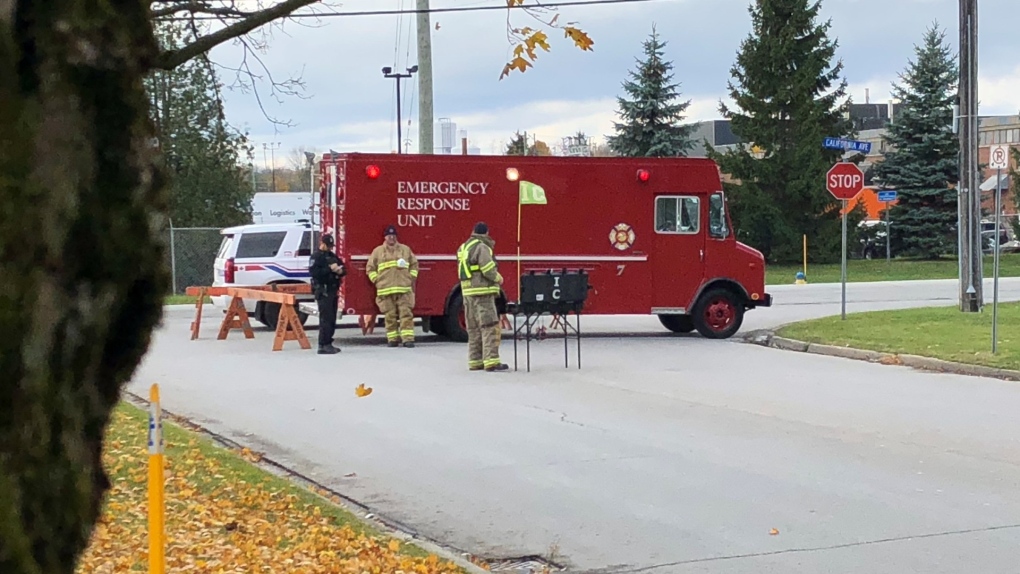 A hazardous materials team is at the scene of a chemical spill at the 3M plant in Brockville, Ont. Oct. 28, 2020 (Nate Vandermeer / CTV News Ottawa)

BROCKVILLE, ONT. -- A chemical spill at the 3M plant in Brockville has been successfully resolved, but the source of the odour is still unknown.

Firefighters from Brockville and Ottawa responded to a call at the building on California Avenue Wednesday morning.

Brockville police said employees were evacuated and the spill was contained to one room. The incident began when an employee smelled a foul odour and pulled the alarm, which alerted the Brockville fire department.

"We got a call this morning for an automated alarm," Brockville Fire Chief David Lazenby told CTV News. "The Brockville Fire Department responded to the scene. One of the 3M employees had smelt an odour and acted accordingly, pulled the alarm so we responded."

Fire officials say there is no danger to the public.

The hazardous material call in Brockville has been successfully resolved. Thank you to @ChiefAyotte and our partners from @OttFire for your support. pic.twitter.com/NEL6ghT8Gn

The Ottawa Fire Service's hazardous materials team was called in to help deal with the spill.

"It appears to be a storage area that has a variety of different chemicals or products stored in there so we're not able to determine as yet which product may have leaked and caused the odour. So we've got the time, everyone is accounted for so we're just taking a cautionary approach and with our colleagues from Ottawa Fire Services, we will assess the situation what caused the odour and address it from there," Lazenby said.

At 5:40 p.m., Brockville Fire said crews were preparing to leave the area. CTV News Ottawa's Nate Vandermeer reported the source of the odour was not located and an air sample will be taken in the building Wednesday evening.

In a update at 5:40, crews are preparing to leave the area. The source of the odour could not be found and an air sample will be taken again in approximately 3 hours. Waltham Road will reopen shortly. #Brockville @ctvottawa

Some businesses downwind from the scene were evacuated as a precaution. Lazenby said no injuries have been reported but one employee was checked by a nurse and a Brockville firefighters went to hospital as a precaution with some minor respiratory issues.