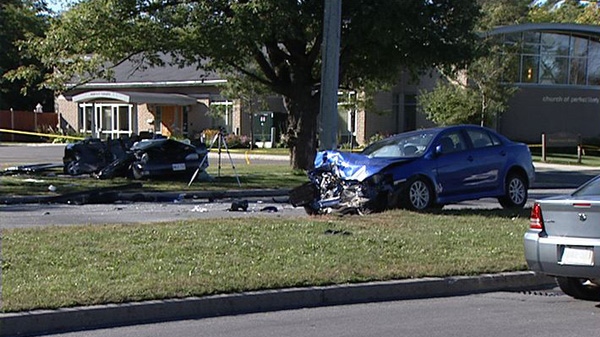 Charges have been laid as the Special Investigations Unit continues to probe a late night crash on Hunt Club Road near the Airport Parkway.

Paramedics were called to the area around 11 p.m. Sunday night to respond to a head-on collision between two cars, one of which was being pursued by police.

Randy Scharf was walking to work Sunday night when he said he heard signs of trouble.

"I heard sirens going off, thought someone was just being pulled over, and then two seconds later I heard three crash sounds," he said. "Maybe a minute and a half later, two cops rush over to the door, rip it open, grab the driver; it felt as if he didn't want to go."

"It mounted the curb westbound and entered the eastbound lanes, where it collided head-on with a Mitsubishi," he said. "The Mitsubishi was driven by a lone female who didn't sustain any injuries, but the car was a write-off."

Police said they have charged 31-year-old Ricardo Henry of Ottawa with two counts of criminal negligence causing bodily harm and one count each of failure to stop for police and resisting arrest.

Paramedics said they treated the female passenger in the Lexus at the scene. She is reportedly in serious but non life-threatening condition in hospital with severe lower body injuries.

Ansell said the pair inside the car are extremely lucky to be alive.

"Given the extent of the intrusion on the passenger side, I'm surprised anyone did survive that," he said.

A relative told CTV Ottawa the pair in the Lexus are in a relationship, with three children now being taken care of by their grandmother.

Hunt Club road between the Airport Parkway and Downpatrick Road was closed to eastbound traffic while the SIU investigated, but was re-opened around 3:15 p.m. Monday.

The SIU is called in any time a civilian is injured or killed as a result of police action. There were three investigators on the scene - two forensic investigators and a collision reconstructionist.

With a report from CTV Ottawa's Karen Soloman