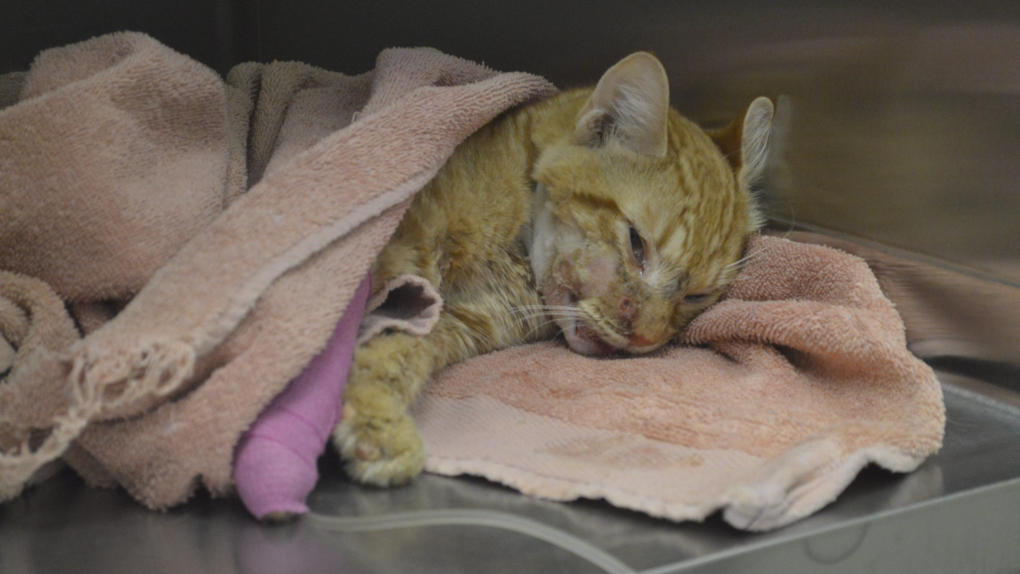 OTTAWA -- Ottawa police are investigating after a good Samaritan found a one-year-old orange tabby cat with a gunshot wound in the face.

The cat, named Gulliver by Ottawa Humane Society staff, is currently being treated with pain medication, antibiotics and wound flushes, and will undergo extensive surgery to repair its jaw.

In a statement, the Ottawa Humane Society says someone found the cat in Larose Forest in Clarence-Rockland on Oct. 9 "in terrible condition – Gulliver had been shot in the face."

The individual took the cat to a local veterinary clinic, where he was transferred to the Ottawa Humane Society.

The humane society says x-rays revealed Gulliver suffered a broken jaw, broken teeth and an infection in the wound.

"The x-ray also found metal fragments in his jaw. It appeared he had been suffering from his wounds for several days," said the humane society.

On the Ottawa Humane Society's donation page to support Gulliver's treatment, the humane society said, "Surprisingly, a bullet fragment was discovered in his jaw and more fragments were seen on X-ray."

Ottawa police tell CTV News Ottawa they received a call from the Ontario Inspector of the Animal Welfare on Oct. 14 in regards to a cat that had been brought to an animal hospital with serious injuries. Police say the file was assigned and is being investigated.

Extensive surgery and medical care for Gulliver is expected to cost more than $3,000. The Ottawa Humane Society's donation page shows more than $17,000 has already been raised for the care.