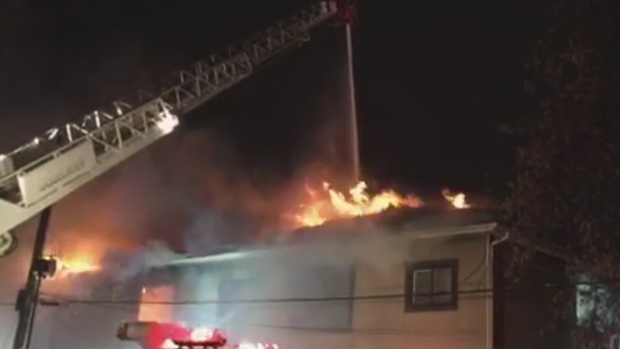 There are stories of panic and chaos emerging after a devastating fire at a building in Casselman, east of Ottawa, on Wednesday.

The fire broke out around 3:30p.m. just as the power went out on Casselman’s main street rue Principale. It is believed a live wire fell onto the roof of a well-known business.

The building, which was completely destroyed by the fire, housed five apartments and one commercial business - a RayJans Windows and Doors.

Jason Swerdfeger is an employee at RayJan. He was on the balcony when he saw a wire swing and hit the store’s sign.

“Soon it was arcing out and blowing out the transformer,” Swerdfeger said.

At that point Swerdfeger said he jumped off the store’s balcony and phoned 911.

“A police happened to be rolling by and we stopped him. He stopped traffic and within minutes the volunteer fire department was here,” he added.

Junior Marier and Tracey Earlam were watching a movie when they noticed a flash of light.

“The electrical wires were all starting to singe and burn and you could see it through the floors,” Marier said. “By then I grabbed two of the cats, I put them in my girlfriend’s arms and told her to get outside and I ran down with her.”

Marier and Earlam had just moved into the apartment January 1st and lost everything in the fire. The pair has started this gofundme page to purchase new furniture, clothing and necessities.

In total 10 people were left homeless, including a family with a newborn baby, who lost their pet puppy and turtle in the blaze. Items for the family are being collected by a friend through this Mothers In Need Facebook page.

Eight families were initially displaced, some of whom live in neighbouring buildings. By Thursday morning, neighbours were allowed back into their homes.

No one was injured.