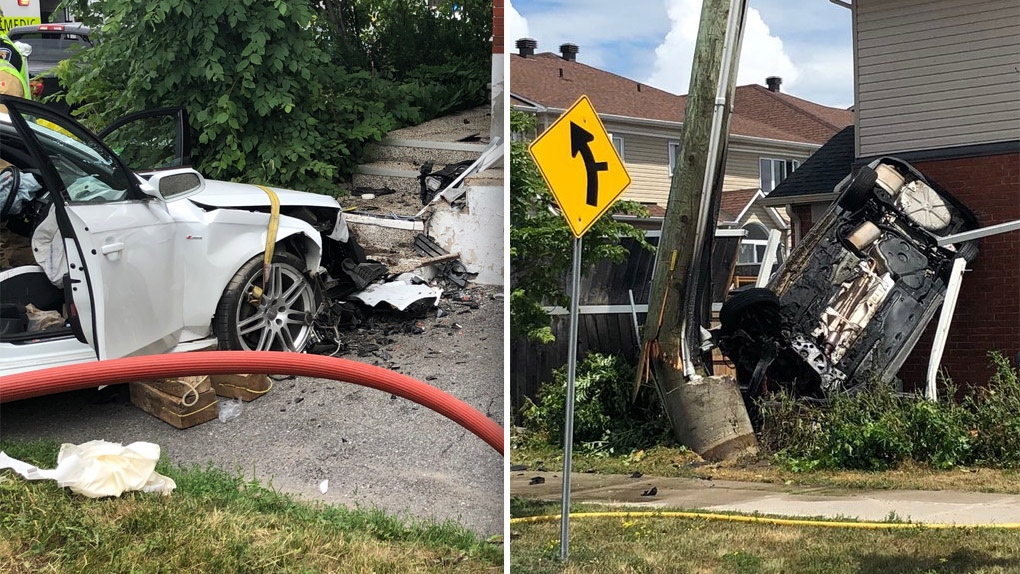 Two people were critically injured when their vehicles crashed into buildings in Ottawa on Monday. (Ottawa Paramedic Service)

OTTAWA -- Two drivers were critically injured after their vehicles crashed into buildings in Ottawa on Monday.

The separate collisions happened less than half an hour apart, about 15 kilometres away from each other. One happened in Barrhaven, the other near Carlingwood Shopping Centre.

At around 12:07 p.m., emergency crews were called to a home on Carling Avenue at Aaron Avenue when a driver crashed into the front steps of a home.

Paramedics said in a news release that a woman was trapped inside the car and suffered serious injuries. She was taken to the trauma centre in critical condition.

Firefighters checked with the occupants of the home to ensure no one inside was hurt.

* Incident in progress *
Currently on-scene with our partners from allied services. Our paramedics are actively treating one patient with severe injuries. #ottnews #otttraffic https://t.co/1H8BXvklCE pic.twitter.com/sT3QQhGnBa

Then, at around 12:20 p.m., a vehicle crashed through a wooden fence and into the side of a home on Longfields Drive, near Paul Métivier Drive in Barrhaven. Fire officials said the vehicle struck a hydro pole and rolled over against a house, striking the top of the gas meter. The crash caused a fire, which crews put out.

“I ran outside and saw a young gentleman in pain on the sidewalk,” said Melanie Robinson who lives beside the house that was hit. “There was a lady looking after him and the firetrucks arrived really promptly.”

Paramedics said they treated one man for multiple injuries at the scene. He was also taken to the Ottawa Hospital trauma centre.

Robinson said there have been issues with speeding along Longfields for years.

"They need to put up speed bumps," she told CTV News. "They need to do something because someone is going to lose their life someday and I hope it was not today.”

Police closed roads in each area for their investigations. What exactly led to each crash is currently unknown.