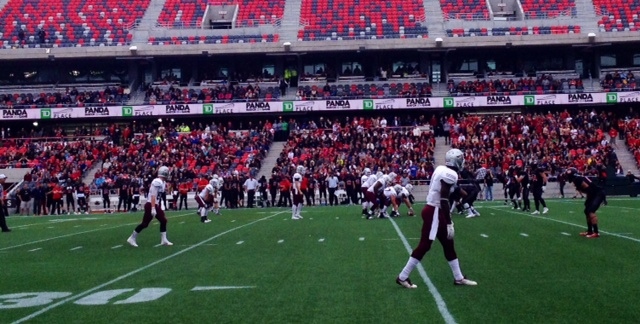 The Carleton University Ravens have won the annual Panda Game beating the University of Ottawa Gee Gees 48-45 in overtime.

It was a close game that came right down to the wire.  The Ravens scored the first touchdown in overtime, only to have the Gee Gees tie it up 45-45. With the scoreboard tied once again, the Ravens made a field goal that propelled them to victory.

This is the second year in a row that the Ravens have won the coveted Panda Trophy. Last year the team won with a hail mary pass during the last play of the game. The Ravens have now won 14-47 Panda Matches against the University of Ottawa.

"It's just really nice to see the two schools come together," said one fan.

A record 17,500 football fans packed TD Place for the game. Last year about 12,000 people were in attendance.