OTTAWA -- There is no one more important to Carleton Place resident Peggy Sue Brushett than her granddaughter Catherine.

“She is my world, she is our future,” she says.

The Mi’kmaq woman brought the 14-month-old to Caldwell Street School where her childhood teddy bear hangs.

It is just one of 215 stuffed animals left at the school to represent the Indigenous students whose remains were discovered at a former residential school in B.C.

“What was happening and what was found is based upon my culture and my brothers and sisters, grandfathers, grandmother are all affected by this,” Brushett says. “That the country of Canada would have this occurring with us and for the First Nations, it’s very heartbreaking.”

After leading the initial smudging ceremony last week, Brushett is back once again to honour the lives lost as the memorial continues to grow. She’s wearing a black face mask with an orange hand painted on – her granddaughter’s handprint. 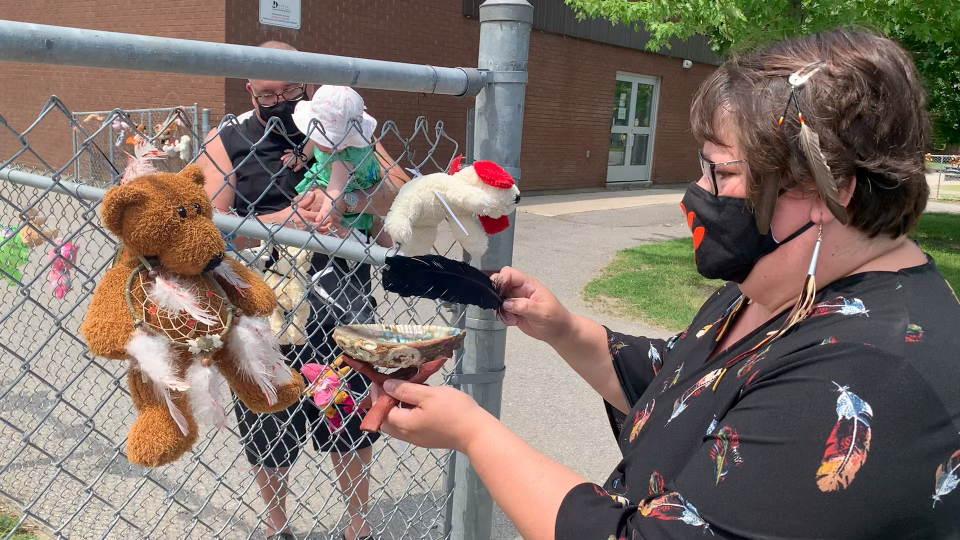 Growing up on the Miawpukek First Nation reserve in bay d’Espoir, Nfld., Brushett says she didn’t know much about her culture.

“We weren’t recognized as a reservation,” she said. “It took a bunch of brave men to go on a starvation for the government to notice and we were able to get our rights back.”

When that finally happened, Brushett was already in her late teens.

Her grandchild is enrolled in a day care for Indigenous children. The family determined to give her granddaughter the opportunity Brushett says she never had .