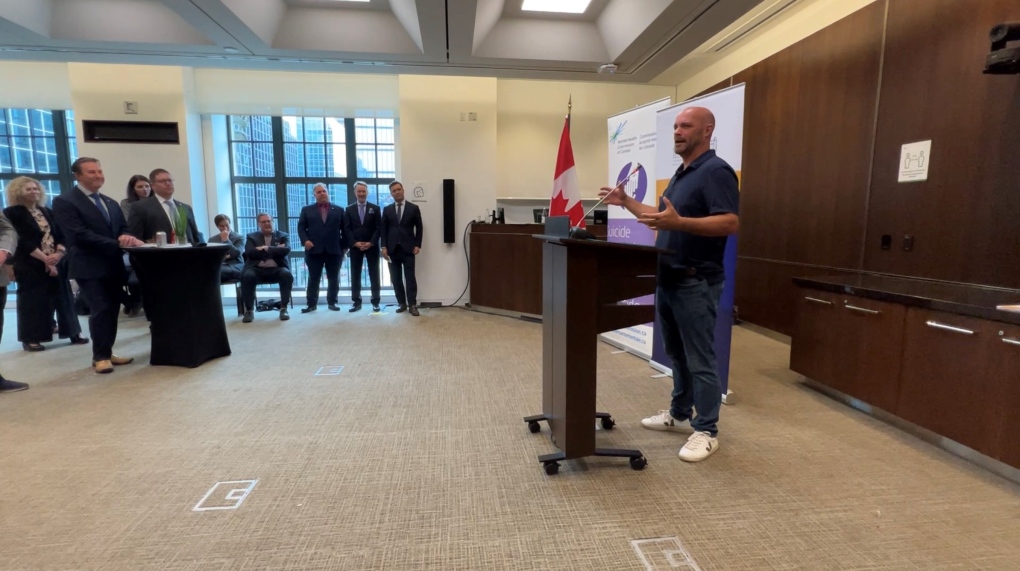 Father’s Day on the Hill is an annual event, which brings together Members of Parliament from all parties, key mental health stakeholders and policy-makers to discuss mental health with a focus on men and fathers.

The event also highlights the importance of mental health in men and helping to lift the stigma, with a Canadian television star sharing his personal struggle.

Handyman Bryan Baeumler, who turned his trade skills into television stardom on HGTV, shared his experience as a young man, filming one of his first shows and the reality of how he was feeling.

"I have a massive anxiety disorder and agoraphobia, what have I signed up for, not to mention public speaking," says Baeumler standing in front of a crowd of nearly 100 people.

The man behind a business empire, which spans multiple countries, says at the time he did not understand what he was feeling and feared the worst.

That was then. On Wednesday, Baeumler was the guest speaker in a non-partisan event hosted at the Wellington Building in the Parliamentary Precinct, open and speaking about his own journey as a father, entrepreneur, husband and man.

"Anxiety, depression, any type of mental health struggle is not a mechanical process, it’s a thought process and it really boils down to education," he says.  "Because we all curate our lives and we deliver ourselves to other people in the way we want to see that in the mirror but that’s not necessarily the way it always is for people … It’s not always rainbows and unicorns, you know, there are days that are warthogs and thunderstorms."

The Father’s Day on the Hill was founded in 2018 as a non-partisan initiative led by MP Matt Jeneroux, with help from MPs Majid Jowhari and Gord Johns and in partnership with Movember and the Mental Health Commission of Canada.

This year will introduce the new Hi Dad Foundation, that will continue the work of raising awareness about the importance of mental health by leading national conversations, research and advocating for lasting change with maximum impact.

"Over the past five years, we have been able to create substantial awareness about the importance of men’s mental health through this event. We want to continue to raise awareness year-round with the Hi Dad Foundation, with the goal of breaking down barriers and stigmas, creating normalcy around mental health," says Jeneroux. "We have so many men that suffer in silence right now and so to be able to stress the importance of talking to the men in your life is what events like this are all about."

According to the Mental Health Commission of Canada,  over a third of Canadian men will not talk to others about how they feel to avoid feeling 'unmanly'.

Nearly half of Canadian men aged 18-34 feel pressure to be manly. New fathers aren’t screened for postpartum depression like new mothers are, but 10 per cent of new fathers experience symptoms within six months of their child’s birth.

Of the estimated 4,000 suicide deaths in Canada each year, close to 75 per cent are men.

"It’s important to educate people that there are resources there and just talking about it can take a weight off of people," says Baeumler. "It’s not necessarily about starting conversations and starting things and pushing people in a certain direction, it’s about removing all the barriers so that people feel comfortable staring those conversations themselves."