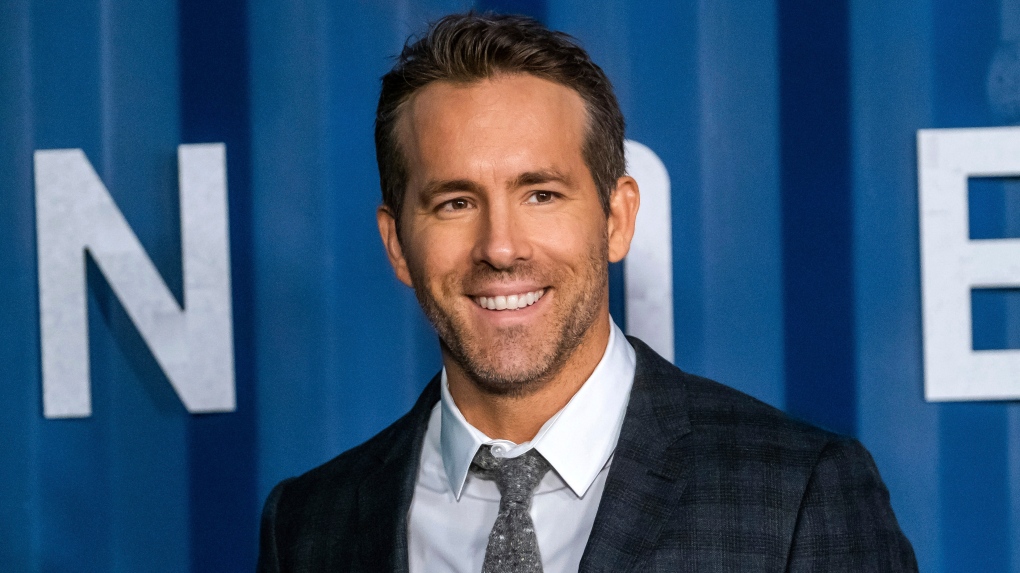 In this Tuesday, Dec. 10, 2019 file photo, Ryan Reynolds attends the premiere of Netflix's "6 Underground" at The Shed at Hudson Yards on in New York. (Charles Sykes/Invision/AP)

The award, part of the Governor General's Performing Arts Awards, recognizes work of an extraordinary nature and significance in the performing arts by an individual artist and/or company in the past performance year. Recipients are selected by the National Arts Centre.

The Vancouver native and Hollywood star tweeted a video of Canadian musician Steven Page singing a song in his honour.

"Last night, Canada honoured me with a Governor General's Award and this video. I'm not crying. It's just maple syrup," Reynolds tweeted.

"Steven Page is a friend and a legend for wasting this amazing song on me," he added, while thanking Governor General Mary May Simon and the National Arts Centre for the honour. "I'm a wreck."

Last night, Canada honoured me with a Governor General's Award and this video. I'm not crying. It's just maple syrup. @stevenpage is a friend and legend for wasting this amazing song on me. Thank you to Her Excellency, @GGCanada, Mary Simon. #GGAwards @CanadasNAC I'm a wreck. pic.twitter.com/0ALteFw2QN

"Ryan Reynolds is one of Canada’s most beloved and widely recognized actors. In a repertoire ranging from TV sitcoms to animated and feature films, he has established himself as a versatile and engaging performer with a charismatic and quirky persona," reads the statement announcing his receipt of the award. "Most recently, he has earned popular and critical acclaim for his portrayal of the title character in the hugely successful action movies Deadpool and Deadpool 2."

He was congratulated on social media by many public figures, including Ottawa mayor Jim Watson.

This is so well deserved. Ryan, your kindness and generosity has touched many in your former city of Ottawa - from your support to our food bank to doing an interview with three young podcasters @DudesInterview Congratulations and thank you for just being NICE https://t.co/F82BhRNRPA

Last year, Reynolds and his wife, Blake Lively, donated $1 million to Food Banks Canada and Feeding America. Some of the funds went to the Ottawa Food Bank, with a note from Reynolds saying he spent some of his childhood in Vanier.

Earlier this year, he appeared as "Bruce", Ottawa Public Health's notorious fictional intern who was famously blamed for a widely seen tweet in which he appeared to bungle a post congratulating the winner of the Super Bowl. The health unit reacted to the award by saying "Bruce" is the this is the first member of a public health communications team to win a Governor General’s Award.

There's been a lot said lately about our dear social media intern, Bruce. And now, Bruce would like to say a few words...#SteadyAsSheGoes #BruceReynolds pic.twitter.com/VCObMQWNq2

"I recommend making a list of people you appreciate, then immediately telling them," Reynolds said in a follow-up tweet, joking that he's glad he didn't "have to be dead to experience something like this."

I’m glad I don’t have to be dead to experience something like this. I’m so beyond touched right now. I recommend making a list of people you appreciate, then immediately telling them. You don’t even have to write this list with the blood of your enemies. Just a regular pen works.