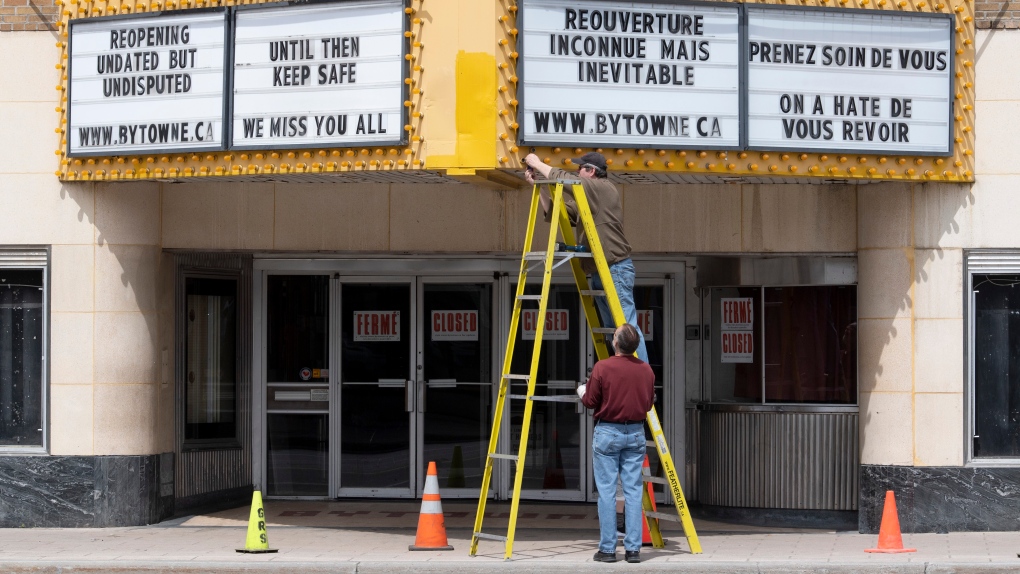 Two men work on the marquee of an independent theatre in Ottawa, Wednesday, May 6, 2020. (Adrian Wyld/THE CANADIAN PRESS)

OTTAWA -- The show will go on at the ByTowne Cinema.

In a statement, the ByTowne Cinema said, "Yes, there's light in the darkness."

"I'm happy – thrilled, actually, - to announce that the ByTowne will re-open under new management when pandemic conditions permit," said the ByTowne Cinema.

"The new owners plan to continue the tradition of the ByTowne and operate an indie cinema that will offer international films, documentaries and Canadian movies."

In an interview on Newstalk 580 CFRA's Ottawa Now with Kristy Cameron, owner Bruce White said it was a long process to finalize the sale.

"As with any complicated deal or purchase, it takes a little time and patience. Everybody's who's been working has been working under pandemic circumstances, so you can't meet with the people you normally meet with," said White.

"But the process also didn't need to be rushed because the pandemic meant the cinema couldn't be open no matter who owned it. So it was possible to take our time and do things right."

White wouldn't say who purchased the historic theatre, but they've run an independent cinema before.

"I can tell you that they're a pair of people who are very well qualified to do this," said White.

"They know movies, they know running a small business, they know what's in store, they know that there are challenges ahead. Post-pandemic, we don't know exactly how audiences are going to return or how enthusiastically they'll return to the cinema. They have their eyes wide open and they know what they're doing."

In December, White announced the cinema would be closing on Dec. 31, citing fewer customers and fewer films available during the COVID-19 pandemic.

The ByTowne Cinema employed 15 people when it closed.

The ByTowne on Rideau Street opened its doors on Feb. 10, 1947 as the Nelson cinema. According to the ByTowne website, Local entrepreneur Hyman Berlin built the cinema through the fall and winter of 1946. The first film was called "Johnny Frenchman."

Cinemas are currently closed under Ontario's stay-at-home order. Under Ontario's Roadmap to Reopen plan, indoor cinemas will be allowed to open in Step 3 with capacity and other restrictions.