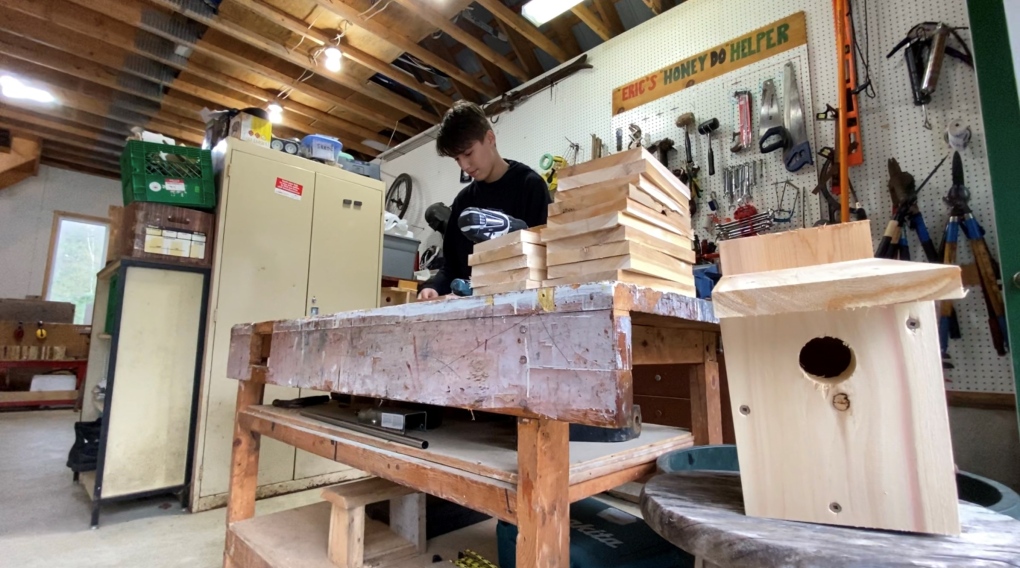 CHELSEA, QUE. -- Finding a creative way to make time fly-by was Corin Leclair’s only thought when he and his father, Eric, decided to build a birdhouse.

"It started last year because I was home during the pandemic and didn’t have any school," says Leclair. "I’ve always liked playing with the wood in the garage and cutting it into different things."

Leclair and his father gathered scrap pieces of cedar planks around the workshop, downloaded some plans from the internet and got to work. The two measured, cut, drilled and assembled the birdhouses, about a dozen. Nailed to trees throughout the forested yard of their Chelsea, Que. home.

"My neighbour saw them and asked if they could have one," says Leclair. "And then we gave her one for free but then she insisted on giving me $20 for it."

Glynis Peters was his very first customer. She has three, two on the side of her shed and another, which she painted. It’s a Peanuts-inspired design, with Snoopy’s yellow bird-friend Woodstock on the side.

"I just wanted to reward him for his time," says Peters. "It teaches them so many skills right so they’re learning and they’re occupied, it’s creative, it’s thoughtful, it’s nature, it’s reflective of where we live."

As word got around the neighbourhood of Leclair’s bird-abodes, he found himself building and selling more. The teenager created a website and sales have been flying high.

"I thought I was going to sell maybe a dozen of them but out of nowhere it took off and I sold over a hundred last year," says Leclair. "So far this year we made around 70 maybe but we have over 140 orders."

By his side, helping build the business is his father Eric Leclair.

"He’s taken this Idea and taken it to whole new levels," says Eric. "It’s allowed him to really hone in on a bunch of different skills that will be a lifelong use to him. Everything from managing orders to how to market himself online how to design stuff that people actually want and get it out to them."

Leclair says you can expect a variety of species like swallow’s, wren’s and chickadees to nest within the walls. The houses have vents and a drain-hole in the bottom. The cedar used for the sturdy, screwed-not-nailed-boxes, is locally-sourced lumber.

Leclair is not only learning how to build a business. As an added bonus, he gets to learn how to drive. The 16-year-old has his learners permit and when delivering to Ottawa, Gatineau, Wakefield and Low, it’s a perfect time for practice. However, with a booming new venture on his hands, from time to time, Eric says he has to take the wheel.

"Dad you really need to drive because I got some emailing to do," laughs Eric. "So I just do what he wants me to do and try to support him."