OTTAWA -- After 27 years, the Buffalo Bills have finally made it back to the AFC Championship game.

However, with travel bans and lockdowns throughout the province, the COVID-19 pandemic is making this epic moment for Bills fans like Brad Payment in Ottawa, bitter sweet.

"As a young kid, probably about eight or nine, I got an outfit from one of my uncles. It was just a pair of shorts and a jersey style thing as a kid from Buffalo. And it just stuck with me ever since," says Payment, who has been a diehard Bills fan for more than 40 years.

This is the first time since 1994 that the Buffalo Bills have made it this far in the NFL playoffs. The Bills facing the defending Super Bowl Champion Kansas City Chiefs, with the winner advancing to the Super Bowl.

"I’m extremely excited," says Payment. "It’s been so long since we’ve gone this far in the playoffs. To have them where they are now, it’s phenomenal.”

More anxious than Payment himself, just might be his daughter Emma.

Over the years, Payment’s collection of memorabilia has been growing. However, his prize possession he says, are his Flutie Flakes, named after former Bills quarterback Doug Flutie.

Paul Ifill, another long-time Bills fan, has been waiting for this moment.

You could say the ongoing pandemic, an "interception" in his pre-game celebrations.

Arty Hurst, a Bills fan for 20 years, took his love for the team one-step further. He built an igloo on his front lawn, and decorated it in Bills memorabilia.

Hurst named his snow creation "The Digloo," after who he says is the greatest ever wide receiver for Buffalo, Stefon Diggs. 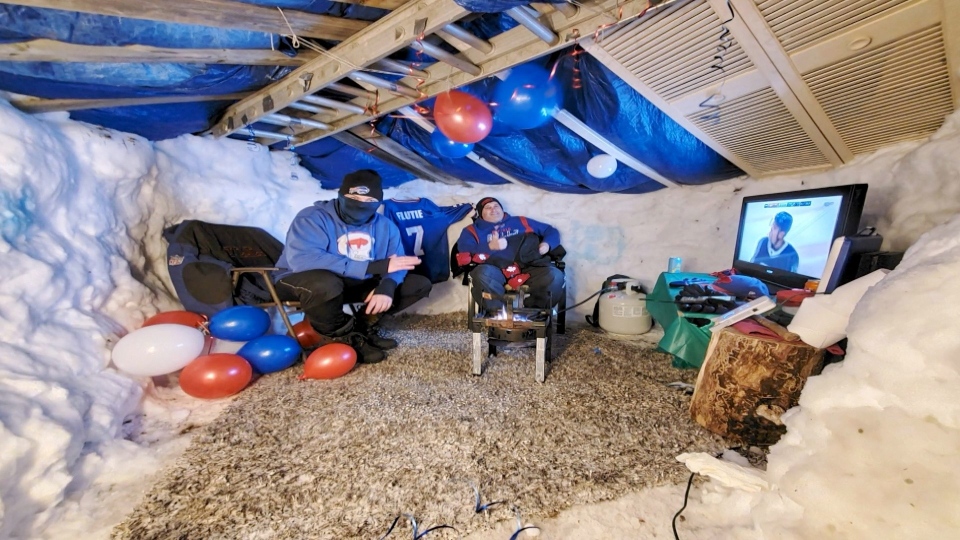 “Started watching games in the backyard, Thursday night games, my neighbours and I. Then graduated to the garage. And then I built this - The Digloo,” says Hurst. “I thought a TV’s gotta go in there somehow. And if I’m gonna put a TV in there, I’m gonna watch the Bills game.”

And being immersed in the bitter cold is almost as if Hurst was in a seat at the Bills stadium in Buffalo.

Still, the essentials are here. Food and beverages in full supply. All that’s missing now, is the win.

"Buffalo 36-34," predicted Payment before Sunday's game. "It’s going to be a shootout."