Bronson bike lane gets a makeover 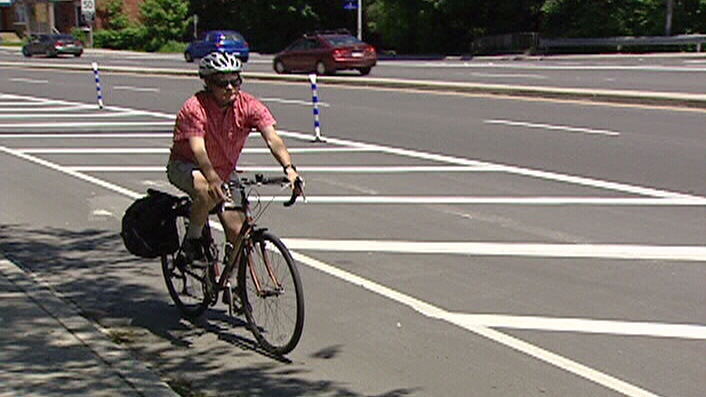 The death of a cyclist along Bronson Avenue last year prompted calls for change.

The first phase of that change went into effect last evening.

The bike lane between Holmwood Avenue and Sunnyside is now clearly separated from traffic in an effort to keep bike and cars from colliding.

The ghost bike is still there; a haunting reminder of the death of a cyclist.  But that death has brought change, which is long overdue for many who travel this treacherous strip.

''I think it's fantastic,” says Marie-Odile Junker as she cycles along Bronson pulling her daughter in a bike trailer, “I feel safe with my daughter to cycle here.”  Junker says she didn't before, though. “No especially because I know someone got killed.”

27 year old Krista Johnson died when she was struck by a car last October while cycling in the bike lane along Bronson Avenue.  The Carleton university student was travelling north bound in the south bound bike path, at night when she was hit.  Her death has been the impetus for change along a roadway considered dangerous by many cyclists and motorists. Speed has been an issue on Bronson Avenue.  It goes from 50 kilometres per hour to 60 to 70 in a short stretch.  Throw in a mix of cars, trucks and cyclists and it can be a deadly combination.

“I’ve been cut off and had close calls before for sure,” says cyclist Anna Crawford.

As of last evening, the bike lane has clearly been separated from traffic with lines and bollards.

Crawford says the changes are good but danger still exists where cyclists need to cross over traffic at the on ramp to Colonel By.

“It would make me feel safer if people turning onto Colonel By know bikers have to cross that turning lane,” says Crawford.

The councillor for the area says this is just the first step.  The ramps will be reconfigured to hopefully slow traffic down.

"We're going to change the geometry of those on and off ramps,” says Ottawa Councillor David Chernushenko,”so the car has to slow down to make that turn.”

For many cyclists, who have taken to riding on sidewalks or avoided Bronson altogether, any change is welcome news.

"It's a huge improvement over the previous situation,” says cyclist Anouk Hoedeman.