BUTTERNUT BAY, ONT. -- Two Brockville women embarked on an early morning walk Saturday, raising awareness for a 'below the belt cancer', one that affects around 12,000 Canadians annually.

Shannon Wilson and Alison Wall started walking just after 4 a.m., beginning near Butternut Bay, west of Brockville. They will walk the entire 1000 Islands Parkway, through Gananoque and almost to Joyceville, before they turn around, and walk back, 101 kilometres in total.

"I think we're at, we're almost at 32 kilometres, so we're almost a third of the way," Wilson told CTV News Ottawa, near Landon's Bay.

The cause, close to both their hearts, as Wall's dad is a bladder cancer survivor, and Wilson's husband Kent was diagnosed for the second time this summer.

"It'll be OK, it's a hard scary diagnosis for anybody when you hear that word," said Wall. "But having a good outlook and positivity and raising money is helping us focus."

The walk length is significant, as it's the distance from Brockville to Ottawa where Kent is receiving treatments.

"It's kind of like a hidden cancer because you don't have any symptoms typically early on and that's why they are trying to get the message if you see red, call your doctor," said Wilson.

"If you're urinating and there is blood, that's a huge warning sign that a lot of people don't know about," Wilson said. "So this is starting to help with awareness so that people know if they see that, they need to get to their doctor right away because if it's treated early on it's got a very good success rate." 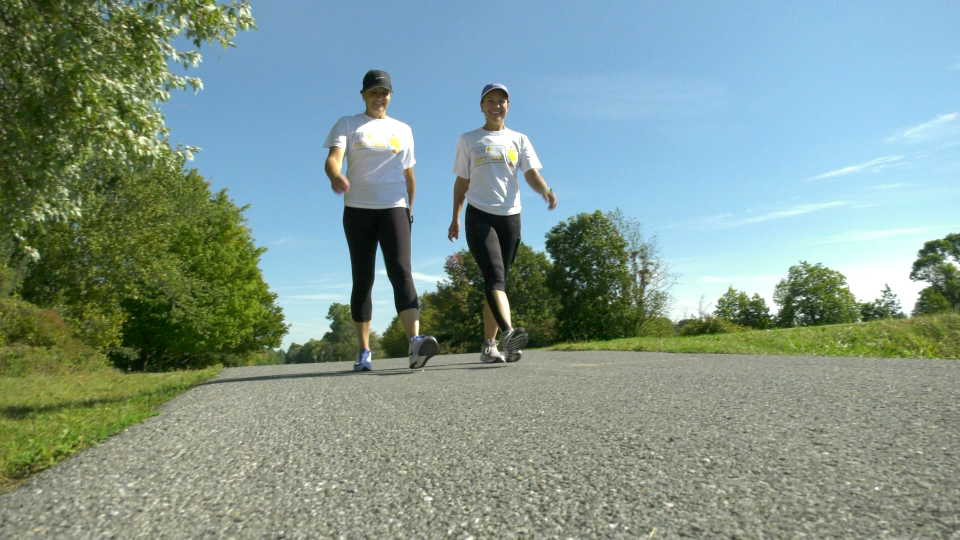 Kent was alongside his wife and friend throughout the day on Saturday, offering encouragement and helping with snacks and drinks along the journey.

"It's pretty emotional seeing people support you and give so much money," Kent said. "Initially, to be honest, I didn't want them to do it. (I'm) kind of a private person, but I think it helps her get through it and I said give me 24 hours once we do this everybody's going to know."

Kent was first diagnosed in 2014, going to his doctor after what he thought was an injury playing hockey.

His doctor found bladder cancer and he underwent treatment, being cancer free for three years before his latest diagnosis.

"I went in for a routine checkup end of July and they told me that there was a tumour present in my bladder," he said. "(They) scheduled surgery for Aug. 25 and by the time that rolled around there was two tumours and they removed them and I am recovering now and waiting for pathology results that I get on Sept. 28 for the next treatment."

"(It's) tough for me, just everybody knowing your business, but it's for a great cause. We have to raise money to find treatment," he added.

Wilson had originally set a goal to raise $10,000 this year, but had more than doubled that by Saturday afternoon.

"Alison's mom is just like, 'You have to just finish that walk no matter what because you've raised a lot of money.' So we will definitely finish," she said with a laugh.

With annual bladder cancer walks across the country being held virtually this year, the women are among the top four in Canada in donations. 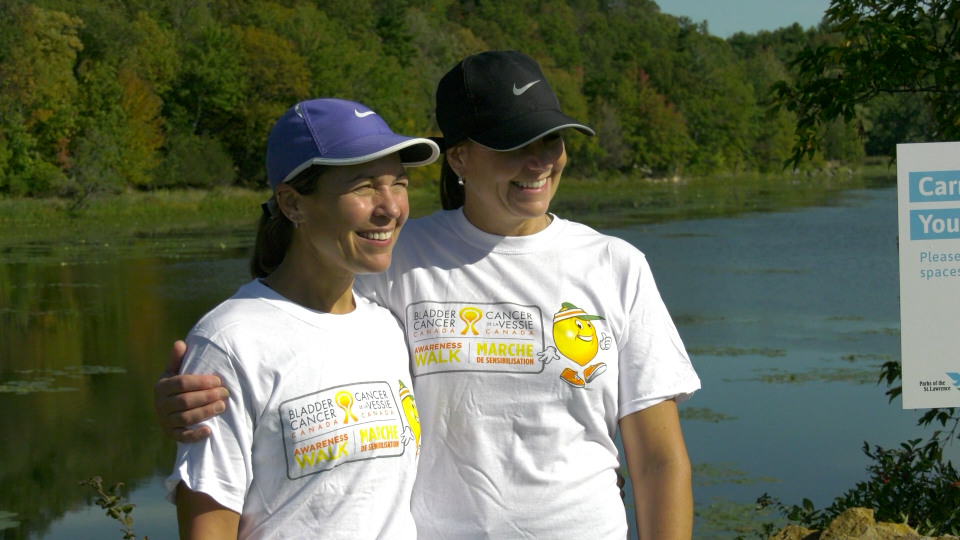 "These walks account for over 60 per cent of our funding so they are critical to us maintaining our mission of patient support, raising awareness and funding research," said Gerry Ross, Bladder Cancer Canada peer support volunteer.

Ross is also a bladder cancer survivor, now six years cancer free, and was also on hand for the walk on Saturday, handing out t-shirts and supporting Kent and both women.

"It has a very high recurrence rate which makes it the one of the most expensive cancers to treat," Ross said.

"We have a one-to-one peer support program which our donations help support and as one of the peer support volunteers, I support new patients like Kent and others across Canada from my experience," Ross added.

"There's a high recurrence rate and so it's not unexpected for it to come back a few times and we have an online forum where patients can get together and share their questions from other people's experiences," he added.

"When we left this morning we were at like $18,000 and were over $19,000 so people are still donating so it's crazy," Wilson said. "We have great friends and family and co-workers in Brockville, that's where 90 per cent of the money has probably come from but we're even getting donations from overseas so this has been really great."

Both women, nurses at the Brockville General Hospital, said they were feeling great so far in the walk, praising the excellent weather.

"My chins are taped up, we're doing good," Wilson said. "We've changed outfits, we're going to kind of change our shoes every 25 kilometres, we've had lots of drop-offs of Timbits and pumpkin spice lattes and we feel good right now."

"From everything we've researched, 65 to 75k is when you start to slow down so we're trying to keep a good pace now and see how we go," she added.

"Thanks to everybody for donating and supporting us on this journey," Kent said. "We still probably got a long day ahead of us, we're going to go into the night and I'm going to be here with the girls and see them through it all and it's quite an accomplishment, it really is."

"We will do this every year, not 101 kilometres, this is a one time deal, but who knows, we both like a challenge," the women laughed.

The pair is expecting to finish their walk back in Butternut Bay around midnight or the early hours of Sunday morning.