BROCKVILLE, ONT. -- A 50-year career in broadcasting is an accomplishment in itself, but to do it at only one station is another story.

"Fifty years. I can't believe that it's been 50 years here," Wylie said from the Brockville studios on Highway 29.

In 1971, when Wylie began his career in Brockville, he thought he'd be starting out as a news announcer.

"That's really what I wanted to do. I never thought about hosting a show. I mean, I listened to radio, I was in Toronto listening to 1050 CHUM, and so when I came here, the person who worked evenings decided he wanted the news job. So, they offered the evening shift to me," Wylie said.

"I didn't know what the heck I was doing but I remembered what the announcers at CHUM sounded like," Wylie added. "so I got on the air the first day and you know, the deep voice and trying to throw it and Bill English, the program director, came in right away and said 'no, you don't have to put on the voice, just be yourself'. So, that was the best advice right off the bat."

Wylie has been an ambassador for Brockville ever since, using his talent to emcee events and help organizations fundraise.

His biggest accomplishment, he says, is getting people through the ice storm of 1998.

"There's several, but I think the ice storm that most people will remember," Wylie said. "I had planned an Elvis Presley morning because January 8 was his birthday. Well, that all went out the window and we had a program, the Bruce Wylie Show was a talk show, so I stared that at 9 o'clock and that went on for two weeks, non stop on the radio."

"Many people say I slept at the radio! I didn't!" Wylie laughed. "Got here, I started on the air at four in the morning at that particular time and I stayed here until about six at night. Went home, grabbed some sleep, then came back in, and did that for the first week."

Richard Gray, regional general manager of local radio and television for Bell Media, says he got his start in broadcasting thanks to Wylie.

"I was a high school student at Thousand Islands and CFJR, at the time, was looking for people who might want to make a career in broadcasting to work here part time, and he gave me my first ever job," Gray said. 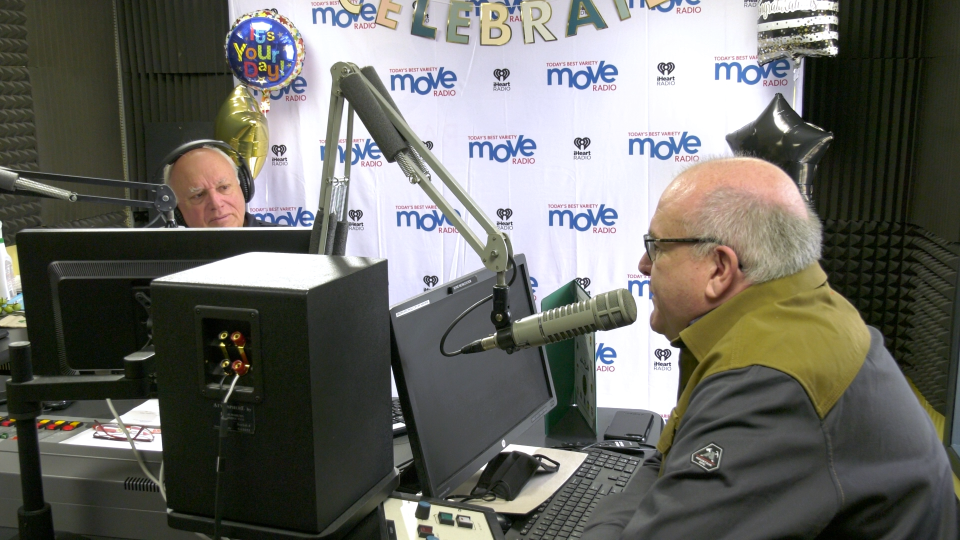 "I fell in love with the business and learnt so much here that I've carried forward into my 30-year career as a broadcaster and in broadcast management. The biggest thing probably being the importance of commitment to community and the importance of truly making the community that you live in a better place."

Gray said Wylie's ability to connect with the community has been a key to his success.

"The community of Brockville and the surrounding area would be a completely different place had it not been for Bruce Wylie," Gray said. "The commitment he has made to almost every organization in this city over the last 50 years and this assistance that he has provided in terms of raising money for charity and just helping to grow and evolve the infrastructure here is truly incredible and think the community has a lot to be thankful for in Bruce Wylie."

This week, the City of Brockville even named April 7 'Bruce Wylie Day'. 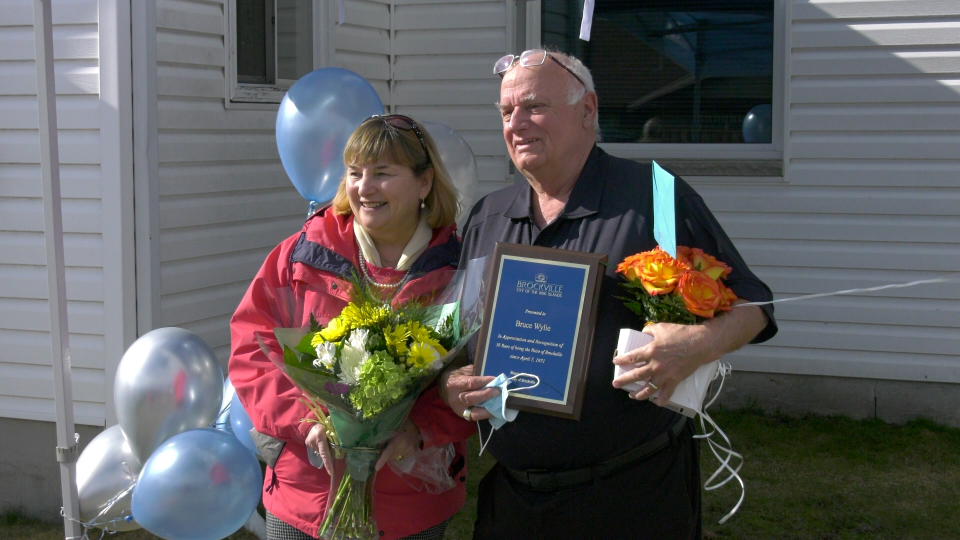 "Council unanimously supported that recommendation and why wouldn't we? He is one of our most popular sons and ambassadors to the city of Brockville," Mayor Jason Baker said outside the station.

"The Voice of Brockville is really more than a title. He has carried the airwaves for 50 years. he has taken us through two very traumatic events, the ice storm and now this pandemic. There is a sense of calm when you can turn the radio on, hear the same person, he's speaking to us as a neighbour and as a member of our community and its that level of consistency that is pretty unheard of," Baker added.

"I think one day doesn't do enough to say thank you for everything this gentleman has done in the community, outside of the radio booth as well as inside so we wish him all the best and love to see him for another 50," Baker said.

A small crowd of around 15 friends and co-workers formed outside the station to congratulate Wylie, and many people took to the phone during his morning show to congratulate him.

His wife of more than four decades, Eileen, helped cut the one cake; another had a caricature of Wylie on top. 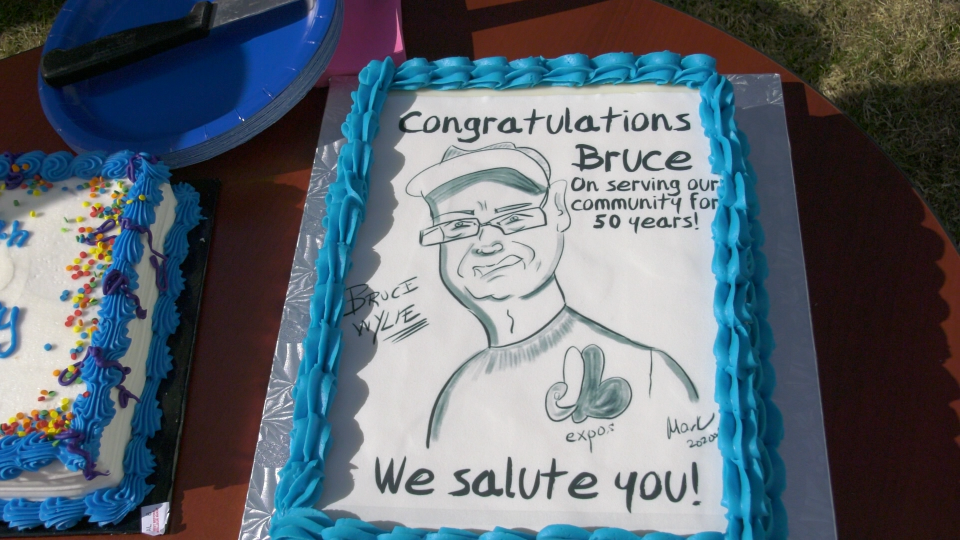 "I think it's a huge honour for him today and it's a huge opportunity for him to say thank you to the residents of Leeds Grenville and Brockville that have helped make his career a success. He's certainly dedicated his life to the community and to his family and we just love him," Eileen said. "We are very proud of him and I'm sure he's very proud of what he's accomplished here today.

"We're really proud. We thank you, for Brockville, for the opportunities and all the free meals we've had over the years," she said with a laugh. "We can't wait to get back to some of those things again for sure."

Eileen added that Wylie loves working in the events, but the cancellation of many due to the ongoing pandemic hasn't stopped him from staying in touch.

"When life hands you a lemon, he makes lemonade and that's certainly been what he's done over the last year as we haven't been able to get out," Eileen said. "We've tried to keep in touch with people in the community and reach out through letters and encouragement and I think he'll keep doing that because that's just who he is."

Sitting down with Wylie, he can tell stories of events, good and bad, for hours.

Wylie says he still has more gas in the tank for a few more years and has now set his sights on a new goal.

"In five years, the radio station will be 100 years old. I don't know, maybe I'll make it that far," Wylie said. 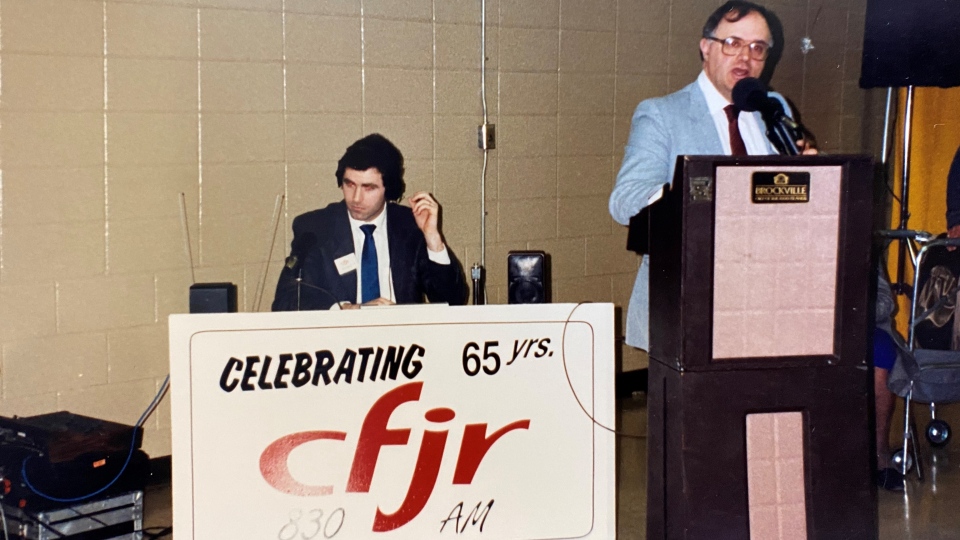 "We'd be happy to have him here at that time because he is truly one-of-a-kind," added Gray.

Wylie said he had booked the Memorial Centre over a year ago for this celebration today, to say thanks to everyone in the community. Unfortunately, with the pandemic, that couldn't happen.

"I had actually booked six bands and entertainers to perform that day, and just invite people in for free and enjoy the entertainment and reminisce and whatever," Wylie said.

"It's a very, very big thing that this community has supported so many of the projects i've been involved in. When I think of Riverfest, the YMCA, the halls of fame that I started, to the fundraising for just about every major organization, from the food bank to palliative care, to the hospital foundation to heart and stroke, I mean you name, it we've tried to help those organizations," Wylie said. "We can't do that if the community isn't there to support you.

"Radio is pretty powerful. We saw that during the ice storm; I see it right now during the pandemic, how important it is for us to get that information out, and I know people trust me that when there is something happening that they can tune in and that I'll get the information to them," Wylie said.

"Just thank you. Thank you to everyone for your support."

Wylie said he was appreciative for the honour of having the city dedicate a day to him, and he reminisced about a time he and the city didn't see eye to eye.

"Thank you to the city and council for doing that (Bruce Wylie Day). I don't know what it means, I guess recognition from the city, and that is appreciated. I mean, I have worked very well with the city. I've fought them on certain issues or events that I've wanted to run or promotions," he said.

"I remember one time we were doing a promotion at Reliable (Home Furniture) and giving away a video recorder and they were brand new, you know the VCRs, and you had to be there to win. So, I'm standing outside the CFJR vehicle and going to call out a name, while King Street is crowded with people outside Reliable all the way down the street beside Reliable, all crowded with people, and I'm on a megaphone and I announced the winner and he was standing right beside the truck.

"Anyway, I get a call from the police shortly after that if we are going to close, you know you need to apply to close the street and I said, 'Well, I didn't know we were going to have that many people!'"