An eastern Ontario high school is the best in the province, after their senior girls A basketball team won the OFSAA Championship in Walkerton, Ont. over the weekend.

As most of the team is set to graduate next summer, the timing worked out perfectly, according to the head coach and players.

"This is the highest you can possibly go and can't get any better than this, to be the OFSAA gold medal champs," head coach Matt Reil told CTV News.

On Monday, the St. Mary's Crusaders team received a champions’ welcome through the halls, as classmates cheered and applauded.

The coach noted this core group of girls have been playing together since Grade 7.

"This is a dream, an absolute dream because they are just a great group of girls that wanted to work hard with a common goal, to achieve the highest we possibly can," Reil said.

The OFSAA Championship is a three-day tournament, which sees 16 of the best provincial high school basketball teams battle it out for gold. Other schools participated from Ottawa, Belleville, Kenora, Timmins and Sudbuy. 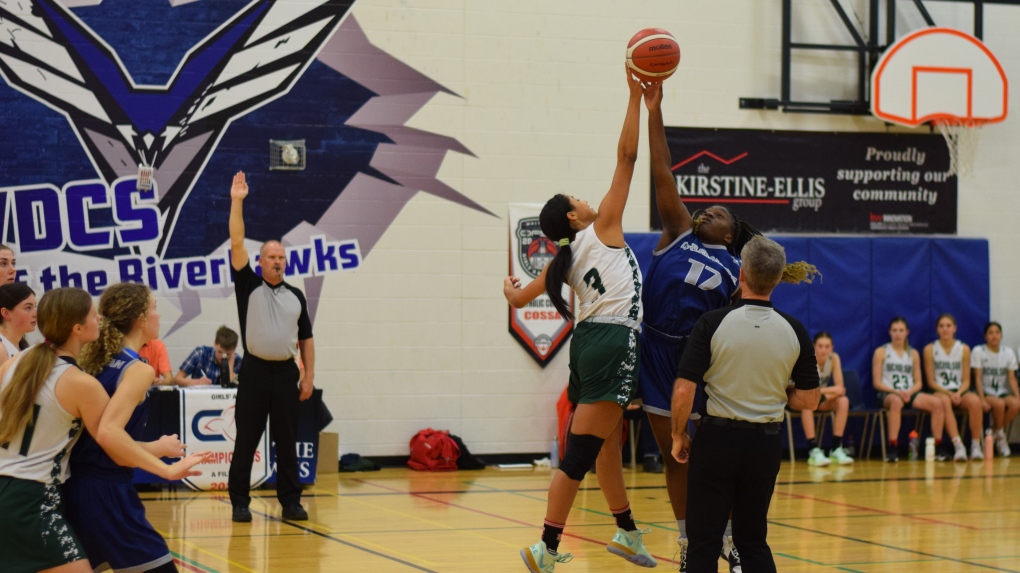 "I was really hoping to win just because it was our last year and I'm really glad we did because I've been playing with some of these people even since Grade 3," said player Sydney Jardine.

"It still just feels so unreal, like the amount of people that were with us along the way, the girls that I've been with since Grade 4, it's just amazing," added Payton Malone.

They both admit the tournament was not easy, having to overcome a thrilling overtime game, and shutting down a player on another team who had more than 70 points the game before.

"We had a game plan going into it, she was pretty much their whole offence so we just have to stop her, and Lily-Mae Berriman on our team did that really well," Jardine said. "She only got a few baskets so we were really proud of ourselves after that."

"That overtime game was really nerve-wracking for everyone, but we got through it as a team and we do what we do best," Malone added.

The Crusaders had momentum going into the tournament, only losing two games since September, and once in Walkerton, they went 5-0 on their way to their first championship since 1998.

At the school’s entrance, a salute to the champs welcomes visitors, with the championship banner set to be raised to the gymnasium wall in the spring. 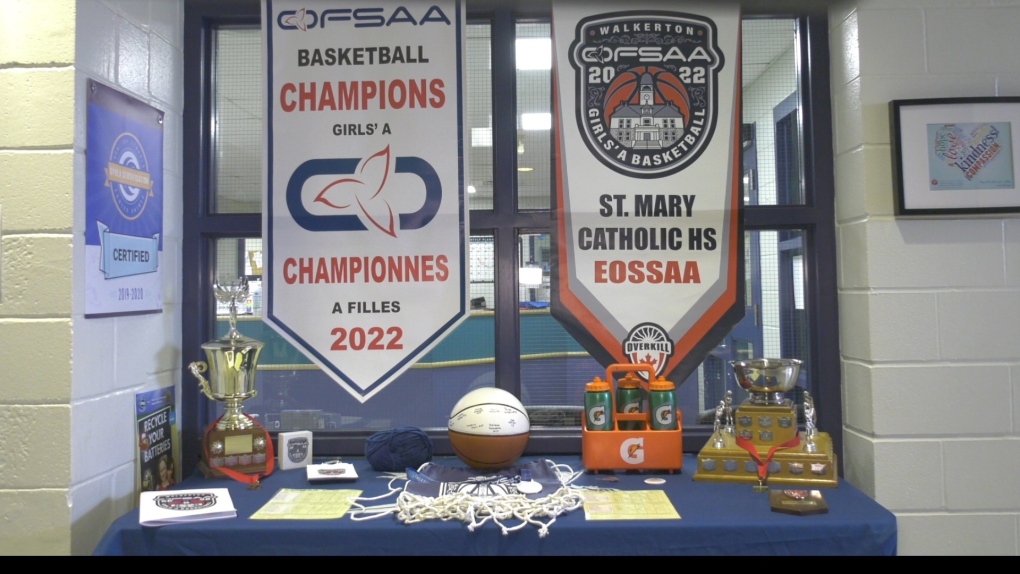 "It is absolutely a big deal, we are beyond thrilled," said St. Mary's Principal Laura Mackler. "This has been something in the making for quite some time, the girls have worked so, so hard and to see them get to those finals was, we were all buzzing, watching the stream from back here was fantastic."

"That last game, I said while I was watching it, that will be, for many of them, the last time they play together," Mackler said.

That realization, hit the team hard in the hotel room after they won, according to Jardine.

"We were all very emotional, just because it was our last game together, some of their last games ever and everyone was just so unbelievably happy," she said.

"We stayed an extra night," added Malone. "We all partied and had snacks and just spent our last night together."

"A lot of them are graduating, it's going to be sad, I'm going to miss this group," Reil added. "It was just an amazing experience and the girls were ready to showcase themselves."

"We've had this crew with a few additions come up all they way through over the last sort of six years," he said. "We always do practices in the mornings and I already missed not seeing them on Monday morning, dragging their butts into the gyms and being ready to play."

While a majority of the team will move on to college and university next fall, Jardine says her time playing ball might have come to an end as well.

"I think I'm a bit too short to do that," she laughed. "I might tryout, but who knows, maybe!"

While Jardine has hopes of attending Dalhousie University in Nova Scotia, Malone says she would like to stay closer to home and attend Queen’s.

"Basketball is like my escape from things, I've met all my best friends through it, and it's just, it's so important to me," she said.

"I just wanted to say thank you to everyone who supported us along the way," Jardine said. "There was hundreds of people watching it live and people I didn't even know that followed basketball that reached out to me after saying congrats."

"It was an amazing experience and I thank the coaches and my teammates and all the fans," Malone said.

"Everyone who has reached out to support this group of girls, we are very truly blessed," Reil added. "We share this OFSAA Championship with you all. Thank you."

A powerful 7.8 magnitude earthquake rocked wide swaths of Turkiye and Syria early Monday, toppling hundreds of buildings and killing more than 1,300 people. Hundreds were still believed to be trapped under rubble, and the toll was expected to rise as rescue workers searched mounds of wreckage in cities and towns across the area.

Experts say the outlook for the loonie in 2023 largely depends on commodity prices, how the U.S. dollar fares, and whether central banks are successful in avoiding a major recession.

China accuses U.S. of indiscriminate use of force over balloon

China on Monday accused the United States of indiscriminate use of force in shooting down a suspected Chinese spy balloon, saying it 'seriously impacted and damaged both sides' efforts and progress in stabilizing Sino-U.S. relations.'

BoC's first summary of deliberations coming this week. Here's what to expect

The Bank of Canada is set to publish its first summary of deliberations Wednesday, giving Canadians a peak into the governing council's reasoning behind its decision to raise interest rates last month.

Charles Kimbrough, a Tony- and Emmy-nominated actor who played a straight-laced news anchor opposite Candice Bergen on 'Murphy Brown,' died Jan. 11 in Culver City, California. He was 86.

The first battle tank from Canada destined for Ukraine lands in Poland, advocates come together to help sailors who have been stuck for months in a Quebec port, and Beyonce becomes the most decorated artist in Grammys history. Here's what you need to know to start your day.