Brockville, Ont. family rides out Hurricane Ian while on vacation in Florida

Brockville, Ont. family rides out Hurricane Ian while on vacation in Florida

A Brockville family vacationing in Florida rode out Hurricane Ian on Wednesday evening, and while their Disney plans were put on pause for two days, they said it could have been much worse.

Jonathan and Dana Cross, along with their three children and Dana's parents, left Canada on Sept. 17 to finally complete a Disney vacation that was planned in 2020.

While the pandemic delayed the trip for two years, the Cross family never thought they would actually get delayed by a hurricane, even though the situation was discussed.

"Booking at this time of year, that's expected, that you might hit a few days that are really rough because of a hurricane," Dana told CTV News over a Zoom call Thursday morning.

"At first I wasn't super concerned because it didn't look like it was really headed towards us, I didn't even think the parks would close," she said. "I just thought it would be rainy and windy and we would deal with it."

As the hurricane moved into central Florida towards Orlando Wednesday evening, the family bunkered down at their Disney resort to ride out the storm.

"At around 2:30 in the morning it sounded really scary and I did not want to look outside, so I didn't," Dana said.

"The tops of the trees were swaying pretty good, the pool had enough rain that it's overflowed now," said Jonathan Cross.

Originally, the family was supposed to leave their resort on Wednesday and head to a different one, but made the decision to stay put.

"Luckily, there was availability to stay here for another two nights until Friday," Jonathan said. "It's just a better spot for a big family of seven, interior corridors and food available."

"We were able to get a couple things from the store before everybody started grabbing things, so we got a couple quarts of milk, a big jug of orange juice and some frozen food," he added. 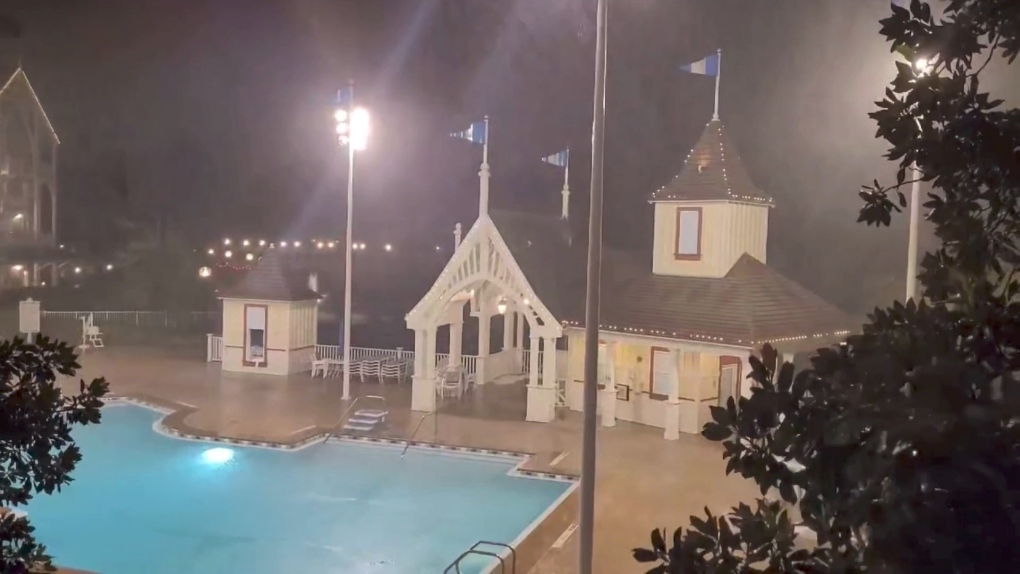 The Cross family says wind and rain hit their Disney resort on Wednesday evening as Hurricane Ian moved through the region. (Submitted)

The family said the situation could have been much worse, after record rainfall flooded other parts of the city.

"Originally, Ian was supposed to go right overtop of us and then it kind of dragged itself southeast of us so we didn't get hit directly by the force winds, so we were very fortunate there," Jonathan said.

Dana said resort staff kept visitors calm, telling them that Disney was one of the safest spots to be.

"I started asking people like if they thought we should be moving and everyone said it would be fine, just ride it out you'll be fine. Don't let it scare you," Dana added. "Just watch the local news, you'll be fine, it's going to be fine, so I was like OK." 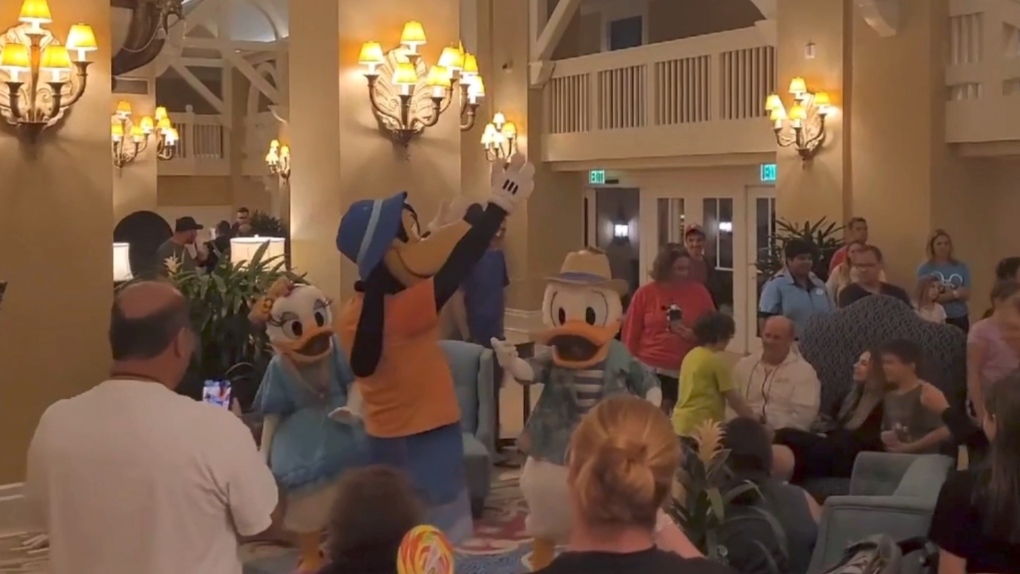 Jonathan kept family members up to date in Canada to let them know they were safe, posting hourly videos of the storm to his Facebook page.

Their three children, however, were going a little stir crazy after more than 36 hours in a hotel room.

"They've been doing good, they have each other to keep busy. It's just the noise level that gets at mom and dad sometimes," Jonathan smiled.

"Everybody slept fine and they've been totally fine," added Dana. "They'll ask can we go swimming or can we go outside but we keep telling them we're not allowed to do anything. They've got tons of art and colouring and they're fine."

Entertainment continued in the lobby with characters like Goofy and Donald keeping spirits up.

"They try to just keep everybody's mind off it, all the cast members are incredible," Dana said.

"It was very calm," added Jonathan. "Disney was very upfront with information. You weren't waiting to hear things, they were very good and prepared I think they have a very good plan in place for when these things happen."

On Thursday morning, damage around the resort was minimal, with branches on walkways and minor flooding.

The park is expected to reopen on Friday, with the family ready to get back to their Disney vacation.

"We did definitely dodge a big bullet," Johnathan said. "I did promise the kids an adventure before we left home and I think I over delivered."

The holiday toys catching the eyes of industry watchers

The World Cup in Qatar has sparked soccer – and non-soccer – conversations around the world. CTV's W5 Executive Producer Derek Miller writes for CTVNews.ca about his observations from the tournament and how soccer is evolving in Canada.