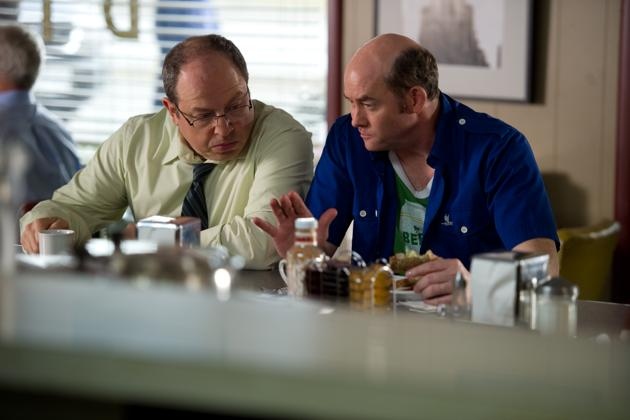 Brent Butt and Anchorman's David Koechner in a scene from their upcoming movie, No Clue.

“Now why wouldn’t you have destroyed that?”

That’s Brent Butt’s reaction to seeing a CTV story on his much younger self. It dates way back to 1990, when a then 24 year old Butt was performing at Diggers Road House in Prince Albert, Saskatchewan – the closest comedy club to Butt’s hometown of Tisdale.

“That’s an apple-faced youngster living his dream right there,” says Butt. “From the time I was 12 I wanted to do stand-up.”

Brent Butt is returning to his roots in Ottawa. He’s kicking off a cross-Canada stand-up comedy tour at Centrepointe Theatre. It’s his first full tour since his stint as the star of the hit TV show, Corner Gas.

He’s calling it the “Almost a Movie Star” tour. Because it leads up to Brent Butt’s other new project – a full length movie. Butt wrote, produced and starred in the gritty mystery/comedy “No Clue.”

Butt plays an ordinary guy who gets mistaken for a private investigator. He soon finds himself way over his head in a dangerous murder investigation. His co-stars include Scrubs and Shameless star, Amy Smart, and fellow comedian-turned-actor David Koechner of Anchorman.

“That’s one of the great things about producing your own project. Then you can hire yourself. You don’t have to worry about whether you’re good enough,” jokes Butt.

No Clue opens March 7th. Until then, the Almost a Movie Star tour continues across the country. Butt deadpans,”So this is your last chance to see me before I’m… a guy who made a movie once.”