Beware the red-winged terror of the Rideau Canal 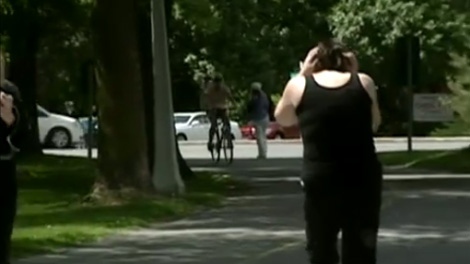 Running along Ottawa's Rideau Canal is supposed to be good for your heart, not strike fear into it.

But for those jogging on the west side of the canal, a hair-raising sneak-attack from an airborne assailant is very possible.

"This bird just came out of nowhere!" cried one of the victims of a red-winged blackbird, pecking away at people near the Canal Ritz restaurant.

"It's like Alfred Hitchcock's The Birds," exclaimed another path-goer.

The bird's nest sits in a tree beside the path, defending its turf against everyone who passes . . . except passing military on the march, oddly enough.

Two women who work at the restaurant said they're regularly harassed.

"You hear it making the loud bird noise, then it comes in and just grabs at your hair," said one of them. "It's not that bad."

"Everyday on my way to work, if I'm walking I get it on the top of my head," said the other.

Some people have come up with their own defences against the air raids, including spraying it with water or a stern waggle of the finger.

The National Capital Commission said it's normal to see these blackbirds during nesting season.

They said the birds usually attack the back of your head, and it's best to keep an eye out when you're in the area.

"We ask the public to peacefully cohabitate with the birds," said NCC spokesperson Jasmine Leduc.

The red-winged terror didn't appear to be willing to observe the ceasefire, putting quite a fright into a CTV Ottawa reporter as she approached it for comment.

With a report from CTV Ottawa's Ellen Mauro