Barrhaven residents concerned new warehouse could bring 1,000 trucks a day to the neighbourhood 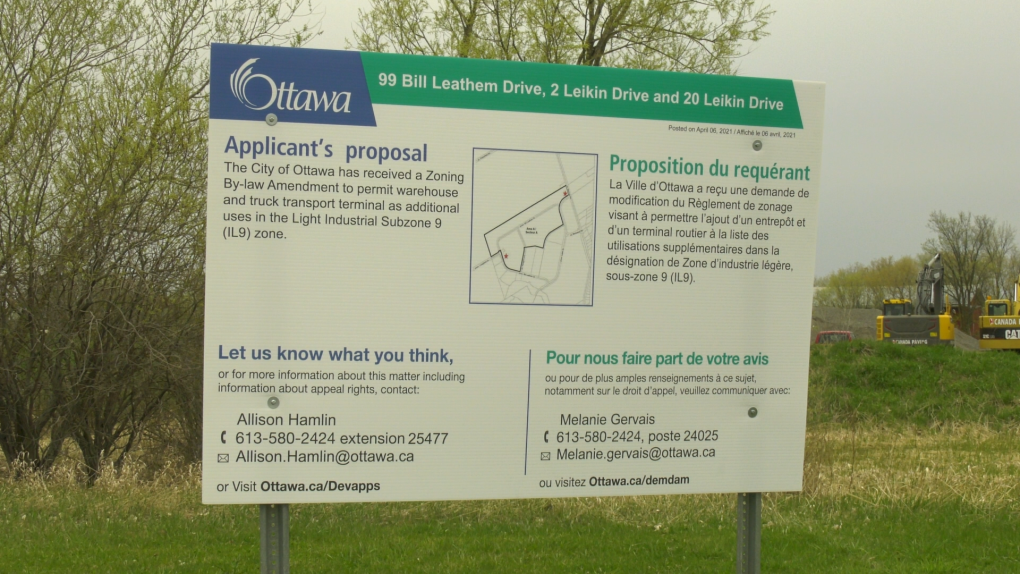 The city of Ottawa has received a zoning bylaw amendment to permit a warehouse and truck transport terminal to be built in the South Merivale Business Park. (Shaun Vardon/CTV News Ottawa)

OTTAWA -- Barrhaven residents are opposing a proposal to rezone land in the South Merivale Business Park to allow for a warehouse and truck transport terminal.

The applicant wants to amend the zoning at 2 and 20 Leikin Drive and 99 Bill Leathem Drive for the facility, which could see up to 1,000 transport trucks a day pass through the quiet suburban streets.

According to the proposal, the warehouse would be in operation 24 hours a day and include a distribution operation. The land would need to be rezoned to Light Industrial Zone, Subzone 9, in order to permit the development.

Barbra Motzney launched a petition with two neighbours to oppose the rezoning, says the proposed new warehouse would be devastating to the area.

"It will fundamentally change the feel and look of this community. The folks of Rideau Glenn and all kinds of new community developments are all concerned," Motzney said. "Having thousands of transport trucks go through every day; that’s noise, that’s pollution, that’s safety risks."

In its planning rationale document, Novatech, on behalf of Zena-Kinder Holdings Ltd., said the proposal would "add uses to an existing business park for a mix of employment uses. It does not prevent the efficient expansion of a settlement areas or cause environmental or public health and safety concerns." It adds that the site is within one kilometre of higher-order transit.

Motzney says the community feels the proposal is not consistent with the planning framework within the city of Ottawa. The site currently houses a few businesses, including: Lumentum, a high-tech operation which focuses on creating a sustainable future, and the headquarters of the Royal Canadian Mounted Police. As a result, she says this proposal seems out of place.

"This business park was designed to be what they call a prestige park according to the city’s own official plan," Motzney said. "This is supposed to be light industrial use that complements the surrounding community,"

Residents have until the end of the month to share their feedback on the proposal. Motzney says she hopes the city will see how much anger and frustration this has caused and put a stop to the changes.

"As a community we need to stand up and say no, this is not an acceptable use."

For more information on the rezoning application, visit https://app.ottawa.ca/postingplans/appDetails.jsf?lang=en&appId=__BDFRSR