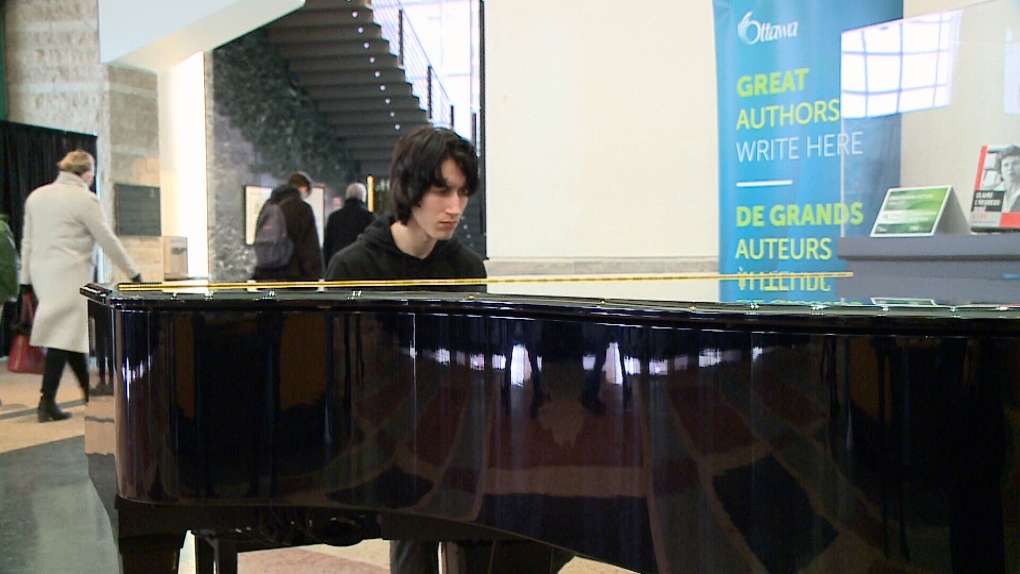 A fixture at Ottawa city hall is a resounding success, hitting all the right notes.  The baby grand pianohas become the "go to" for kids at lunch time or pedestrians passing through.  Where politics sometimes divides people, this public piano is bringing them together.

It's a rare sight to see the piano bench empty here but it doesn't take long before someone takes a seat and the rich sounds of music fill the air at Ottawa city hall.

Grade 12 student Aidan Prince is on his lunch break from Lisgar Collegiate.

“I always enjoy making people's day better,” he says, “It's always nice to see if I can make a positive change in someone's life.”

“I’m self-taught.  I can’t read sheet music for the life of me.”

Michael Mitchell has never taken lessons either but that doesn't stop him.

“Even when I’m playing,” he says, “parents will go by with their children and the children are fascinated.”

The baby grand has been at city hall for 4 years when it was donated by wine writer Natalie MacLean.

For those who work at city hall on a regular basis, like Ottawa Citizen Reporter Jon Willing, that music can sometimes sound more like noise.

“Well sometimes I come to work every day and hope the piano was covered up so I can try and get some work done in peace and quiet,” he says. “Sometimes you hear the same song over and over again but sometimes you hear a really beautiful piano player and you can’t help but poke your head out the door to see who’s playing.”

The fun part, says Michael Mitchell, is that you never know what might happen at city hall.

“One time I was playing here,” he recalls, “and a couple asked me to witness their marriage.”

You also never know who you might meet, like councillor-elect Glen Gower, who has been playing piano since he was little.

“I really enjoy playing,” he says, as he skims over the keys with a flawless rendition of Bruce Hornsby’s “The Way It Is, “and it's a great way to great rid of some of the stress and take a break from what's going on in the day.”