At Ottawa's only rapid test pop-up site, thousands wait for hours and many are turned away

Thousands of people lined up in the early morning hours in Barrhaven on Tuesday to pick up COVID-19 rapid tests, but many were turned away empty-handed.

The lineups started as early as 4 a.m. at the Minto Recreation Complex at Cambrian and Greenbank roads. Several callers told CTV News Ottawa that the first 1,000 people in line were given wristbands and told to return later today. The people with wristbands were lined back up at the complex just before noon, when the tests were set to be handed out. 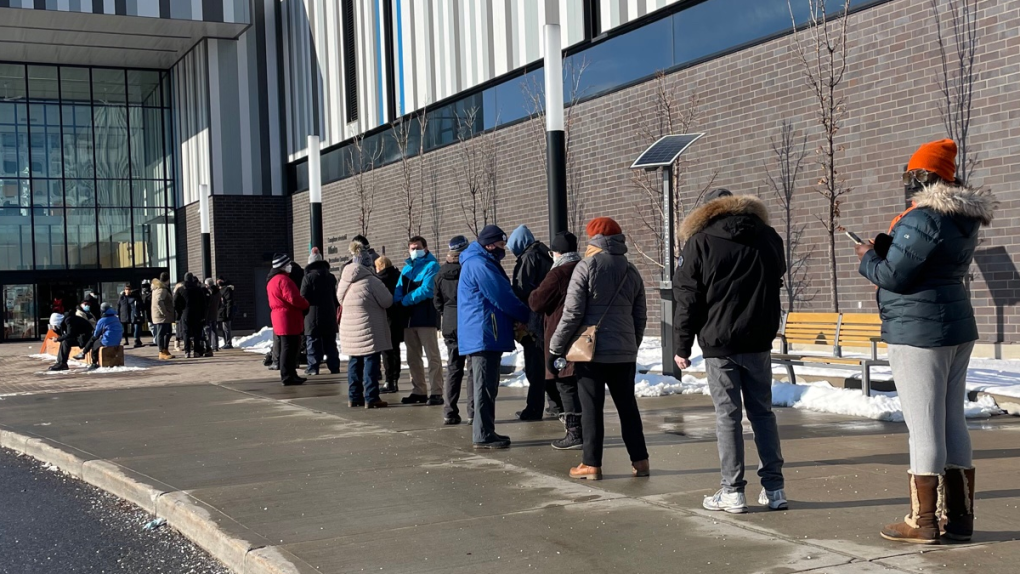 Residents who were given wristbands to get a free rapid test kit at Barrhaven's Minto Recreation Complex early Tuesday morning were asked to return around noon to pick their tests up. (Peter Szperling/CTV News Ottawa)

Everyone else was turned away. One caller to the CTV Ottawa newsroom said the lineup of cars stretched several kilometres down nearby Greenbank Road, and the parking lot was jammed full of cars well before 7 a.m.

The issue was a shipment delay. A spokesperson for the health ministry said the shipping delay is resolved.

Arrived at 5 p.m. and waited for 2 hours just to be told the shipment was delayed. Why couldn’t they have told us that at 5 a.m. instead of making us wait 2 hours in the cold!!!???

Nicholas Belisle lined up at 6 a.m. to get his hands on what may be one of the most in-demand items this Christmas.

"Last time I waited in a line that long was for Sens playoffs tickets in 2007 - when they made the cup final."

He says there were already more than 600 people in the queue when he arrived Tuesday morning.

"I just spent last weekend with several hundred children in Montreal for my job, so I wanted to be (tested) for my family. This will put me in a peace of mind." 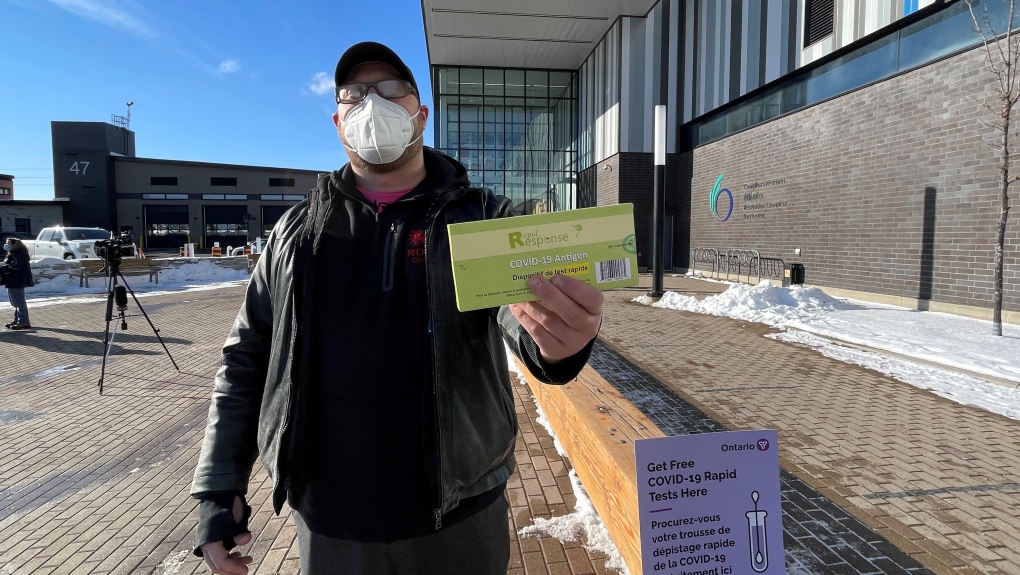 Nicolas Belisle shows off his rapid test kit. He was in line at 6 a.m. Tuesday to be eligible to receive one of tests. (Peter Szperling/CTV News Ottawa)

Ariana Rochford left her car a kilometre away because of the traffic. She walked for 15 minutes to get to the line, but didn't end up getting a test.

"Just as a small precaution, every little bit helps … before meeting for Christmas, a small group," she explained.

The Ontario government is running pop-ups across the province to distribute free rapid antigen tests.

The Minto Recreation Complex is the only location announced in Ottawa so far. The province said the tests would be available at 7 a.m. Tuesday through Friday this week. A sign at the rec centre tells people seeking the tests to return Wednesday at 7 a.m.

Nine other locations are expected to be announced in the coming days. Medical officer of health Dr. Vera Etches said last week province has chosen 10 pop-up sites in Ottawa to distribute rapid tests. The province says it updates its online list every Friday.

Last week, the province handed out rapid test kits through 100 LCBO stores, including seven in Ottawa. Hundreds lined up for those Friday morning only to be told they were not available. The tests arrived later in the day.

Canada is banning China's Huawei Technologies and ZTE, another Chinese company, from participating in the country's 5G wireless networks, citing national security and cybersecurity concerns. Industry Minister Francois-Philippe Champagne and Public Safety Minister Marco Mendicino made the announcement about prohibiting products and services from these 'high-risk vendors,' in Ottawa on Thursday.

An independent group should review the use-of-force policy that guides New Brunswick police to ensure it is concise and understood by all officers in the province, a coroner's jury recommended Thursday.

A leaked draft showing that the U.S Supreme Court justices are preparing to overturn the Roe v. Wade abortion-rights ruling has sparked debate in Canada, including whether Catholic hospitals can impede your access to abortion.

Conservative MP Ed Fast said it was becoming 'untenable' to do his job as finance critic within the Conservative Party of Canada, which is why he asked to be relieved of his duties.

A 911 dispatcher has been placed on leave and may lose her job after allegedly hanging up on an supermarket employee hiding during this weekend's shooting rampage in Buffalo, New York.

Saskatchewan’s Nakaylia Tudway-Cains is one of many mothers in Canada feeling the strain of the ongoing baby formula shortage, and she says she's now paying $400 a month for special over-the-counter formula she needs for her allergic son.