Astronaut encourages students to reach for the stars

OTTAWA -- Students had an out-of-this-world experience last week, as Canadian astronaut Jeremy Hansen spoke with them.

Hansen spoke to Grade 7 to 9 students about his experiences as an astronaut, and about the future of the Canadian space industry.

“In their career time frames, space is going to be used completely differently.”

The future of space

“Space is changing rapidly; we now live in a world where rockets land and are reused. We’re going back to the moon. Last year Canada committed.”

Hansen was excited at the prospect of space tourism. He explained to students that in their lifetime, it’s very possible Canadians will be able to have a vacation in space. 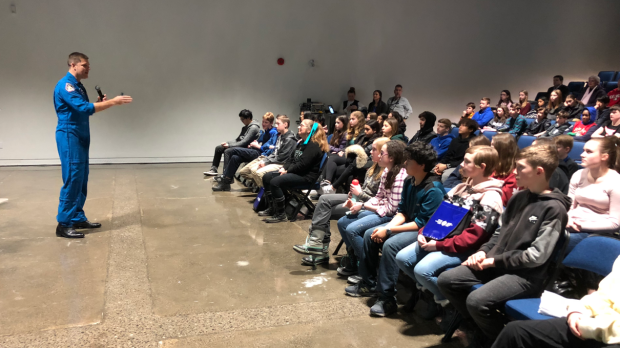 “It might even happen this year. We may even have our first tourists going to space on commercial rockets.”

He explained to the students that space is also a viable career choice for them.

“We expect that the space economy to triple; that means a lot more Canadians will be working in that domain,” Hansen said.

Hansen's main goal was to motivate students and make them aware of their opportunities within the Canadian Space Agency.

A Grade 8 student realized the opportunity: “I never really looked at space or anything as a job choice, but seeing how cool it is, it kind of made me want to see more.”

Corinne Park, a Grade 9 student from St. Paul’s High School learned that becoming an astronaut is a possibility.

“It’s so inspiring to see that people can go to space; it’s not out of reach.”

Hansen knew early on that he was interested in space.

“I’ve wanted to be an astronaut most of my life; this was a goal of mine, but I didn’t get here by myself.”

Hansen explains that it’s not just setting goals that’s important, it’s letting those around you know.

“The reason people were able to help me is because I set goals, even small goals along the way, and I shared them with people."

He shared a memory of how his parents first enabled him to set his eyes on new heights.

“I told people that I would like to be an astronaut, and that I kind of like planes and things that flew, and then my parents said, ‘There’s an airshow.’”

His experience of seeing airplanes fly eventually led him to become a fighter pilot with the Canadian Armed Forces.

Hansen is currently awaiting a mission to fly to space, and that could happen any time before the year 2024.