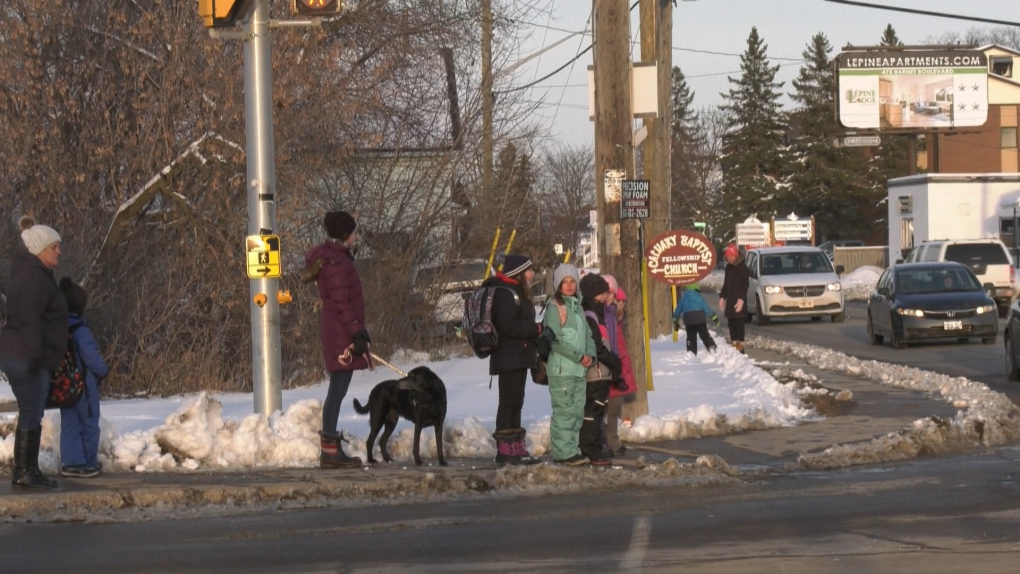 Students wait to cross the street at the intersection of Daniel Street and Edey Street in Arnprior.

ARNPRIOR -- Every morning, Gayle Cunningham worries if her 9-year-old daughter made it to school safely. She's not able to walk her to school in the morning and sends her with a walkie-talkie.

"It's frustrating and nerve racking," says Cunningham. "I'm stressed every day until I get her on the walkie-talkie telling me she's made it to school safely."

That stress and frustration stems from the crosswalk at the intersection of Daniel Street and Edey Street. Cunningham's daughter crosses it twice everyday going to and from school. Cunningham says drivers are regularly speeding and running red lights at the intersection, and it is a matter of when, not if, somebody is hit

"I have had my daughter and her friends have it happen three times so far, twice where they've had to run off the road," says Cunningham, "and the other families, they have had three close calls within seven days."

Cunningham is calling on somebody to take responsibility for the intersection.

Arnprior Mayor Walter Stack says he's received numerous complaints about it and is looking into solutions.

"We're looking seriously at a crossing guard for that intersection, which a number of parents have brought up," says Stack. "We've had ads in the paper for a year now for crossing guards. Nobody is applying. The reality is those people tend to be older folks, and COVID is out there."

Another option Cunningham would like explored is a red light camera.

"People aren't going to want to pay a ticket. They're going to get a ticket once and spread it around town.," says Cunningham.

"We're actively perusing that as an option," says Stack.

He says Arnprior along with a few other Ottawa Valley towns are looking to introduce red light cameras to their communities.

"Hopefully the pain of those tickets will send the message in terms of the traffic issue," he says.

Local OPP have also been asked to pay greater attention to the intersection, something Stack says will start this week, but, ultimately, the mayor lays responsibility with the drivers.

"Slow down and pay attention to what's going on because the risk is in the careless driver."