Arnprior mayor found to have breached Code of Conduct for pamphlet 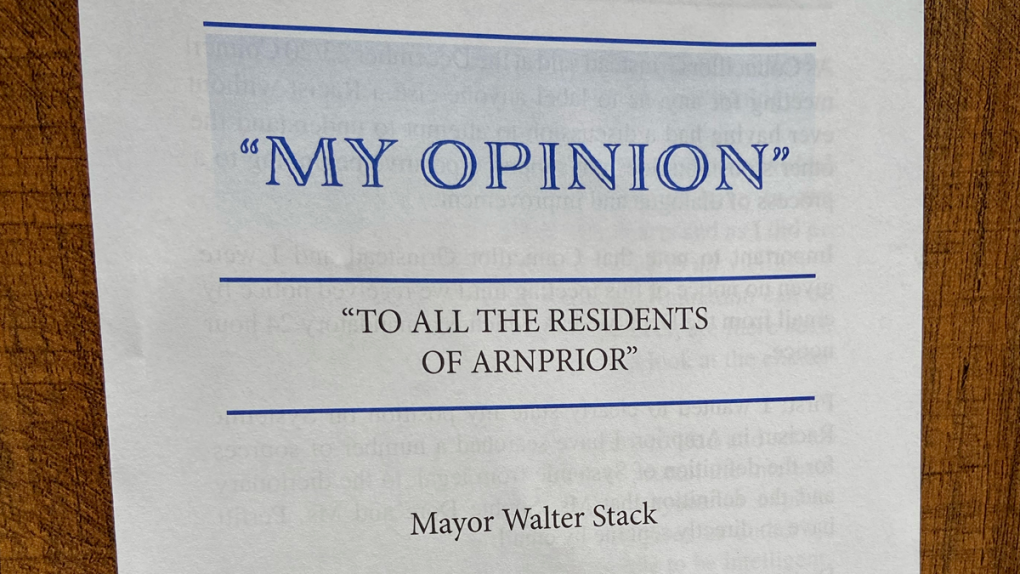 Arnprior Mayor Walter Stack mailed a letter to residents this week, saying he does "not believe racism is systemic in Arnprior."

ARNPRIOR -- Arnprior's Integrity Commissioner has concluded Mayor Walter Stack violated two sections of the town's Code of Conduct after sending a pamphlet to residents regarding racism in the community.

An investigation was conducted following complaints about a four page pamphlet titled "My Opinion" written by Mayor Stack and distributed to residents. In the pamphlet, Stack outlined his views on systemic racism in the Town of Arnprior, which has been a point of contention between the mayor, councillors, and constituents.

The four page letter addressed "To all the residents of Arnprior" stated Stack’s opinion that he does "not believe Racism is systemic in Arnprior."

In his report, Integrity Commissioner William Hunter says Stack was in violation of section 3.3 and 5.1 of Arnprior’s Code of Conduct, relating to Media Communications and Interpersonal Behaviour.

"The letter was not simply an explanation of his position," writes Hunter in his report. "It made judgmental and critical comments about another member of Council, referred to two members of the community and failed to treat the named persons with dignity and understanding even though they may not have extended the same courtesy to him."

The report also finds that it was not a breach of the Code of Conduct for the Mayor to send the pamphlet to residents, or for him to express his views on racism.

As a punishment, Hunter is recommending a reprimand for Mayor Stack, and advises the mayor to carefully consider how he deals with councillors and constituents in the future.

Hunter goes onto say that the matter is related to a previous complaint made against Arnprior Town Councillor Lisa McGee. McGee’s comments online about Mayor Stack were investigated and reported by Hunter, where a fine of 30 days pay was recommended, but rejected by council.

"In my opinion, that decision of council influences my recommendation respecting the complaints against Mayor Stack," says Hunter, in regards to a punishment for the mayor. "His breach of the Code of Conduct was much less egregious than Councillor McGee’s."

Councillor McGee issued a statement to CTV News in reaction to the report, expressing her disappointment in the findings.

"I don’t believe it reflects the public’s response and anger about the issue, nor do I feel that it was appropriate to include so many references to the complaint made against me," says McGee. "The pamphlet received negative attention on a national level and on multiple media platforms, and should be dealt with as a separate, stand alone complaint. To suggest that the post I had made was more egregious of an infraction than the pamphlet is frankly, ridiculous."

Mayor Stack and Integrity Commissioner Hunter declined to comment on the report.