Arnprior homeless man building own roof over his head 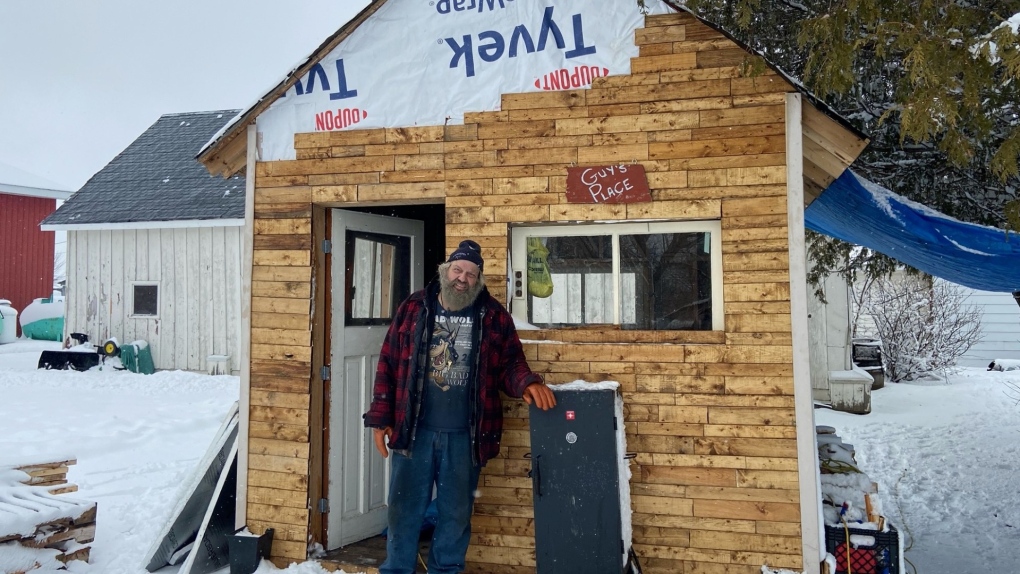 Guy Lamarche stands outside his 'bunkie' in Carp. The 64-year-old built it himself using items destined for landfills. (Dylan Dyson / CTV News Ottawa)

ARNPRIOR, ONT. -- Tucked away at a picnic bench behind the Giant Tiger in Arnprior, you will usually find Guy Lamarche and his husky, Gunner. Lamarche says he has been homeless for four years now, and the owner of the Giant Tiger moved the bench to a spot under some trees for Lamarche to occupy.

“I’ve got my little Canada flag and my birder feeder, and this is my little hangout in the summer,” says the 64-year-old.

Lamarche is a former chef, but now makes ends meet by collecting his Canada Pension Plan. “I dumpster dive for some food sometimes. I collect my CPP so I have some money. Also I can make up to $100 a day collecting beer bottles and beer cans.”

It’s enough to put gas into his van, pay the insurance, and even keep a cell phone. Between his time of tidying up the town’s streets or pruning the flowers in the summer, Lamarche also updates his Facebook following on his page ‘Arnprior - On The Streets’. His page has close to 500 followers who have come to watch Lamarche’s journey through homelessness, but it has also helped him create local connections.

Through his transparency, and keeping up to date in the local papers, Lamarche started attending meetings for the Arnprior Ad Hoc Committee on Poverty and Homelessness. He is now vice-chair of the committee.

“Well, I do have lived experience and I think it’s important for the committee to have some of that,” says Lamarche, who explains that the committee is looking at dozens of proposals to improve the homeless situation in town. Arnprior doesn’t even have a homeless shelter. “(The recommendations) range from housing, guidance, to services, ways to get work, etcetera,” he says.

“It’s going to take more than a year to go through all this and maybe implement some of these things. But getting started and starting to do something now is really what’s important,” stresses the vice-chair.

As the past summer waned, Lamarche decided he was going to take action to improve his own situation. For the previous three and a half years, he says he would sleep in his van, crash on a couch, or even sleep under the stars. However, in September he wanted to change that.

“I was thinking of solutions and one day this came to me, and I decided to build my own bunkie. And I just went, ‘I’m going to do it and I’m going to prove to people it can be done’.”

His 10’x10’ bunkie sits on the old farmhouse property of a friend just outside of Carp. It started with a refined stack of pallets as a floor, and Lamarche added four walls, some windows, and a roof.

Lamarche has some basic tools of his own, but borrows power tools and electricity from the farmhouse. He’s built it all with his own two hands and plans to have it completely finished by the spring. At some point down the road, he would also like to move the bunkie back to Arnprior.

“My dream is to maybe move this one day to Arnprior and make it a demonstration project for people to show them that this can be done.”