KINGSTON -- All 28 units of an apartment complex north of Kingston have been destroyed in a major fire.

South Frontenac Fire and Rescue were called to McMullen Manor on Highway 38 in Verona at approximately 10 p.m. Thursday. The fire was under control just before 3 a.m. Friday.

Officials say one resident of the apartment building was admitted to Kingston General Hospital. All other residents were being housed at the nearby Free Methodist Church.

Investigators say the fire started in a single unit of the building and quickly spread. Chief Chief Darcy Knott said, "there is no reason to believe the fire is of a suspicious nature."

South Frontenac Fire and Rescue says the fire resulted in a total structure loss, with all units in the building affected. 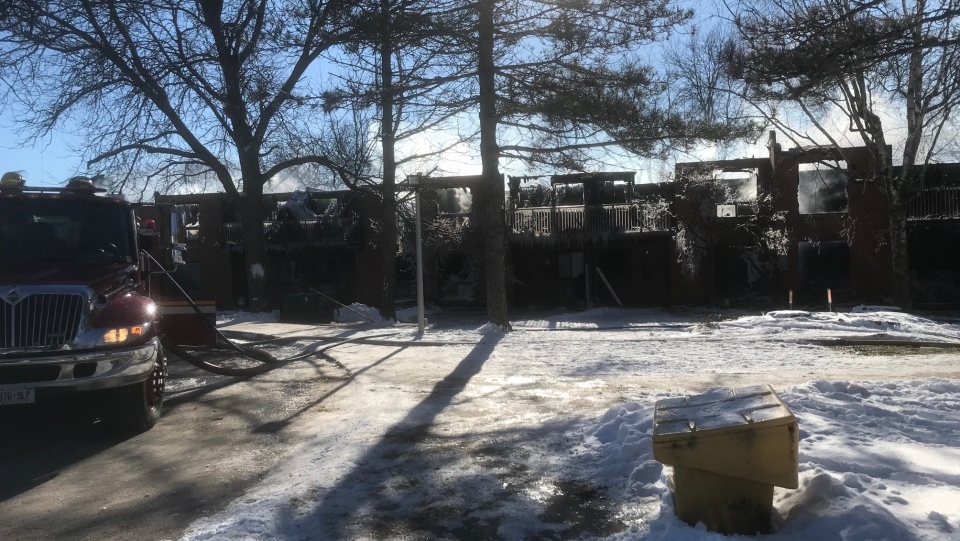 Mike LeCain lost his home of 22 years in the fire.

"It didn't look too bad the first five minutes, then after that it really started to bright up and from there it just kept going."

LeCain says he lost stuff from his grandparents and great-grandparents in "25 minutes, gone!"

"The flames were just starting to come out through the roof. It started at the back of the building till they were kind of lapping up and over," said LeCain.

"Once the ceiling started to cave in. Everything was gone."

There are 28, single bedroom apartment units in McMullen Manor.

"You know when the sun just comes up and it’s really, really bright? Like a bright sunset. That’s what and I thought there's no sun, its 10 o'clock at night," said Linda Bates of the Verona Community Association. "Then it really clicked in and I just thought oh, this is not good."

"From my phone ringing at 6:30 this morning, everyone in the community has come forward and makes sure the community stays safe," said Bates.

“On behalf of Council and our community, I want to extend my sincere condolences to the residents of McMullen manor who lost their homes in this terrible tragedy," said Mayor Ron Vandewal in a statement.

"While it is devastating to know many lost their homes last night, I am thankful that there was no loss of life and grateful to the Red Cross, Victim Services, the Verona Free Methodist Church, Frontenac Paramedics and the Frontenac Detachment of the OPP for providing support to our residents during this difficult time."

The Ontario Fire Marshal's Office has been called in to investigate.