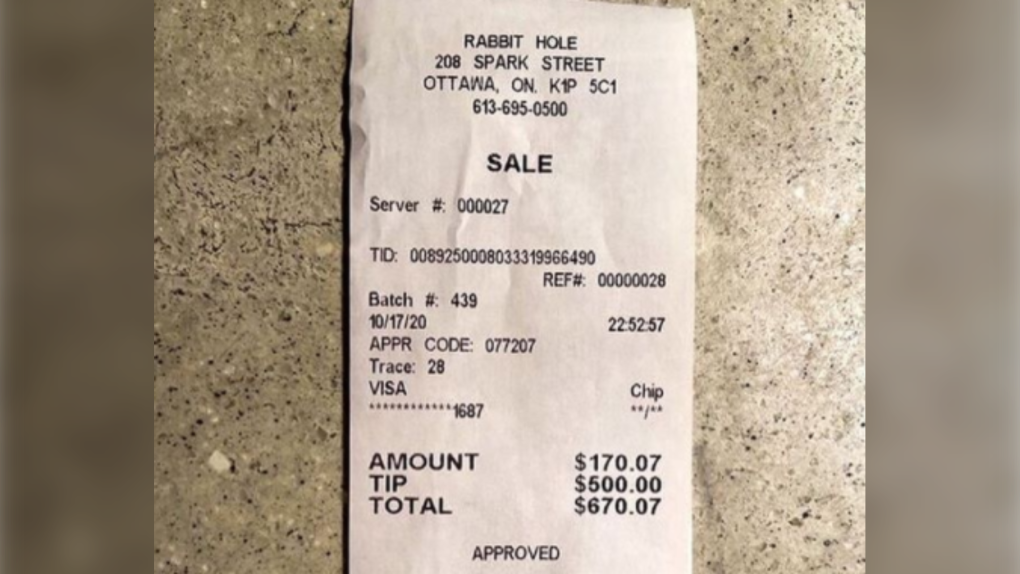 A receipt from the Rabbit Hole restaurant on Sparks Street, showing a $500 tip on Friday, Oct. 17, 2020. (Image via Rabbit Hole / Instagram)

OTTAWA -- As local restaurants have their dining rooms shuttered in modified Stage 2 restrictions, it appears local residents are coming out to support them.

On Friday, CTV News brought you the story of a $700 tip on a bottle of wine at Bambu Restaurant on Riverside Drive.

Now, another local establishment says one of their customers went above and beyond.

In an Instagram post, The Rabbit Hole on Sparks Street announced that a customer visiting their patio on Saturday tipped $500 on a $170 bill.

Similar stories were reported in mid-July.

Ottawa Mayor Jim Watson has encouraged residents to support local businesses during the shutdowns. On Wednesday, council unanimously approved a motion support of the Ottawa Council of Business Improvement Areas, which is calling on the Ontario government to release the data that led to their decision to restrict restaurants, bars, and other businesses in the city.

The Ontario government placed new restrictions on restaurants and bars, as well as other businesses, on Oct. 10 due to a rising number of COVID-19 infections. The restrictions, which prohibit indoor dining, are to be in place for at least 28 days.

Rabbit Hole would like to thank two customers who enjoyed our patio last night and gave a very generous tip to our staff. During these trying times, all small local businesses are struggling and having days where they feel like there is no light at the end of this dark tunnel. Experiencing this overwhelming generosity from our community brings hope that there is light despite all of the darkness. We are so ever grateful, thank you! ❤️