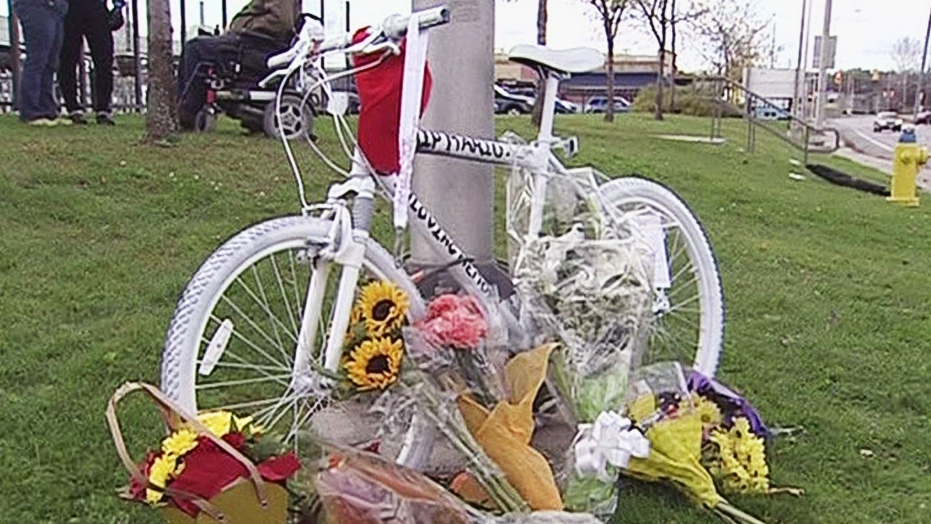 A white ghost bike was placed at the scene of a deadly crash that killed 38-year-old cyclist Mario Theoret at the intersection of West Hunt Club and Merivale roads October 2013.

Ottawa cyclists took part in an annual event Wednesday evening paying tribute to those who have been injured or killed on the road.

The annual Ride of Silence happened on the segregated bike lanes downtown on Laurier Ave.

Every year, the ride takes place in cities across the world on the same day to spread awareness that vehicles and cyclists need to share the road.

“Both cyclists and (drivers) have to be aware of the danger of sharing the road, and some people eventually have a bad accident and pass, and we want to remember them,” said participant Raymond Ouellet.

The annual event remembers all those who have been killed or injured while on two wheels, including those in the Capital.

Last fall, 38-year-old cyclist Mario Theoret died after being struck by a tractor-trailer.

A white ghost bike was put up at West Hunt Club and Merivale roads in his memory.

Last summer, a 56-year-old female cyclist died after she was hit by a cement truck at Bank St. and Riverside Dr.

Members of the cycling community say the roads need to be safer for those on two wheels.

“Every time we hear something like that happening, we sort of step back and say,’ that could have been me, and it affects all of us,” said organizer Francis Ouimet.

Ouimet says Ottawa has become a much more bike-friendly city, but it could be better.

“There are potholes in many spots; often bike lanes are on the ride-hand side where there are all sorts of infrastructure issues as far as bumps and holes,” he said.

The annual Ride of Silence was scheduled to take place in dozens of countries across the globe, including Australia, Spain and Hong Kong.