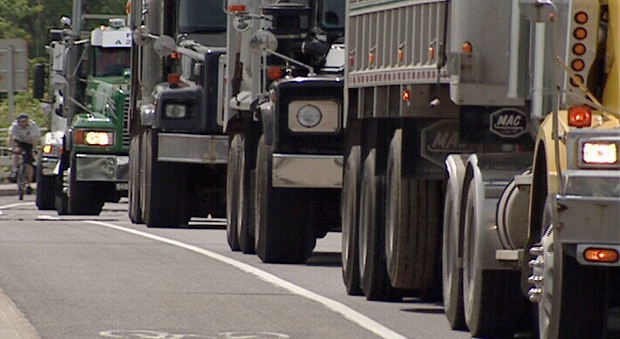 Truckers partially blocked the Champlain Bridge from Ottawa to Gatineau

A convoy of about a dozen trucks rumbled onto the Champlain Bridge between Ottawa and Gatineau Thursday morning, briefly blocking one lane. They were there to drive home a point. The Ontario-based truckers are fed up with years of being driven out of Quebec.

They complain of a mountain of red tape. And they say they’re targeted with incessant inspection stops simply because of their Ontario licence plates. It happens so often that many have given up trying to find work in Quebec. “They just harass you so bad that I sent all my rights back and everything for Quebec because I wouldn’t go any more,” says trucker Gord Griffith of Russell, Ontario.

And it’s not just truckers. “Many of our contractors, myself included, cannot go past this bridge in order to perform work,” adds electrical contractor Walter Pamic of Ottawa.

Meanwhile, Quebec workers can take jobs in Ontario with relative impunity. Ron Barr, head of the Greater Ottawa Truckers Association offers the example of dozens of Quebec companies doing snow removal for the City of Ottawa without being registered to work in Ontario. “We go over there. We’re compliant. We get stopped. They go over here, they’re not even checked,” he says.

It’s a long-running dispute, and Jack MacLaren wants to return to a level playing field. The Carleton-Mississippi Mills MPP has re-introduced the “Fairness is a Two-Way Street” Act calling for retaliatory restrictions on Quebec companies looking for work in Ontario. It was first enacted by Mike Harris in 1999, and repealed by Dalton McGuinty in 2006. “This will slam the door on Quebec. Quebecers will lose jobs. But we’re going to protect Ontario jobs,” says MacLaren.

The eventual goal is to bring Quebec to the table to lift restrictions on both sides and open up the border to more competition. Until then, MacLaren doesn’t rule out more protests down the road. He points out there are plenty of bridges between Ontario and Quebec.