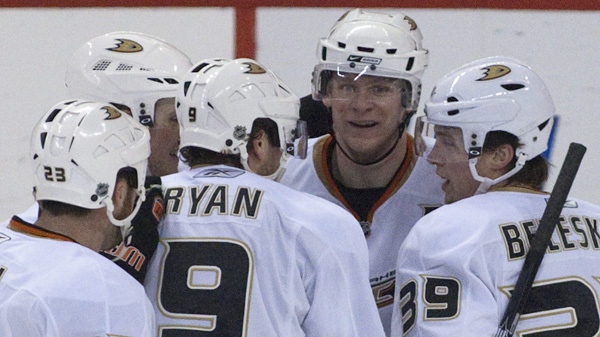 OTTAWA - Brian Elliott and the Ottawa Senators received a first-hand look at what a confident goaltender can do for a team on Tuesday night.

Elliott watched his ninth straight start go by without a victory while, at the other end, Jonas Hiller continued his outstanding season with the Anaheim Ducks.

Hiller stopped 39 shots in regulation time and the Senators couldn't beat the Swiss netminder on three attempts in shootout as the Ducks recorded a 2-1 victory before a sold-out crowd of 19,515 at Scotiabank Place.

"I know you guys don't see it much on the East Coast, but we're quite used to those kind of performances," said Bobby Ryan, who scored the deciding goal in shootout and Anaheim (26-19-4) kicked off its four-game road trip with its second straight win and fifth in the past six contests.

Hiller was in fine form, keeping the Senators (17-23-7) without a win in three games and with just one victory in the past 10 after Corey Perry for Anaheim and Mike Fisher for Ottawa exchanged goals in regulation time.

"He did it again. That's why he's an all-star and that's why he's our No. 1 goalie. That's a pretty special player there," said Ryan, who wristed a shot past Elliott on the second Anaheim attempt.

They didn't need a third try because Hiller made saves on Daniel Alfredsson and Erik Karlsson. In between those stops, Fisher hit the post with his try.

"I was a little lucky, too. I thought it was going to hit my pad and go out, but the goal he scored went off the post and in so I deserved that one."

That sent the Senators to their fifth straight home defeat. Ottawa, which went 26-11-4 at Scotiabank Place a year ago, is just 9-13-3 in the building this season.

It wasn't for a lack of effort. Ottawa outshot Anaheim 40-27 in regulation time.

"It was very similar to probably seven of our last nine games. We work extremely hard, we outchance a team, outwork them, and somehow we don't outscore them," Clouston said. "There's not a whole lot more we can as far as effort is concerned. As far as execution is concerned, we've just got to find ways to score."

The defeat extended the losing slide of Elliott, who made 26 stops for the Senators and played a solid game, but was outduelled by Hiller, who won his 23rd game of the season to tie him for the NHL lead with Montreal Canadiens netminder Carey Price.

Elliott, who has not won since Boxing Day, wasn't in goal for the Senators' lone win in the past 10 games. Call-up Robin Lehner beat the New York Islanders 6-4 on Jan. 13 before being demoted to Binghamton of the AHL.

"We haven't scored any goals and it's obviously tough, but we're going to go through stretches, every team does, and we just want to limit that stretch and try to get back on track," Elliott said.

Since captain Ryan Getzlaf went down with sinus fractures after being hit with the puck in the face, the Ducks have gone 8-2-0. They have won in their past three visits to Ottawa.

Anaheim was coming off a 3-2 triumph over the Edmonton Oilers at home on Sunday and faced pressure from Ottawa early on.

The Senators outshot the Ducks 15-10 through the opening 20 minutes, but Anaheim scored the only goal on a strong individual effort by Perry. The star forward outmuscled Karlsson to a rebound in front of Elliott and, while falling to the ice, managed to lift the puck over the Ottawa netminder.

It stayed that way until late in the second period, largely thanks to the play of Hiller, who was sharp as the Senators again outshot the Ducks 13-3 during the frame.

Ottawa finally got to Hiller as Fisher steered a rebound around the goaltender at 18:19 of the second to tie the score 1-1.

"If somebody would have asked us after the second if we would take a 1-1 hockey game, we definitely would have said, 'Yeah,"' Hiller said. "On the road, it doesn't have to be pretty."

Elliott denied Matt Beleskey on a breakaway midway through the third and also had a bit of help as Ryan ripped a shot off the post with just more than 30 seconds remaining before the game went to overtime.

The Senators fell to 0-3 on the season in shootouts and 16-31 all-time. They haven't scored in eight tries this year.

Clouston was asked about his choice of shooters, particularly the use of Karlsson, a defenceman.

Senators forward Nick Foligno, who had scored in two of the previous three games and was facing his father Mike, a Ducks assistant coach, said he would have liked to have been given a chance.

"You want the game on your stick. Every player does," he said.

"We don't have a lot of guys who have a lot production in the shootout. It hasn't worked. I think we're 0-for-8 right now as far as shots attempted and goals scored," Clouston said, referring to a couple of injured players whom he might have take the attempts. "We've got two of them right now in the stands in (Alex) Kovalev and (Jason) Spezza."

Notes: The Senators recalled right-winger Bobby Butler from Binghamton of the AHL for the game. ... With just one goal in 44 games this season and no points in his past 10 contests, Ottawa scratched forward Peter Regin and dressed a seventh defenceman instead. ... Ducks forward Maxim Lapierre appeared in his 300th NHL game. ... Anaheim travels to Toronto to face the Maple Leafs on Thursday and is in Montreal to play Lapierre's former team, the Canadiens, on Saturday.