'All the training for this is mental': Ottawa cyclist attempts Guinness World Record

The 20-year-old will be attempting to break a Guinness World Record for riding the longest distance on a stationary bike in a 24-hour period inside for a woman.

"People ask me how I am training for 24-hour ride and mostly it is all mental," said Hempstead. "All the training I am doing is mental. The physical training is there. I think that I have the legs to do that."

She started at 6 p.m. Friday and will ride until 6 p.m. Saturday. A strategic move to get the dark hours over first.

"We are starting at 6 p.m. to get the night over with, and then when the sun comes up it will be the home stretch," she says.

Hempstead says she also has to be careful not to push too hard early on. She will be using a smart trainer and a virtual program called Zwift, a cycling app that allows riders to stimulate rides all over the world.

She will be using a flat course, and will aim to ride 30 kilometres an hour.

Hempstead was scouted by RBC’s Training Ground as a future pro cyclist and Olympian. She trains 20 hours a week on the bike, plus running and strength. 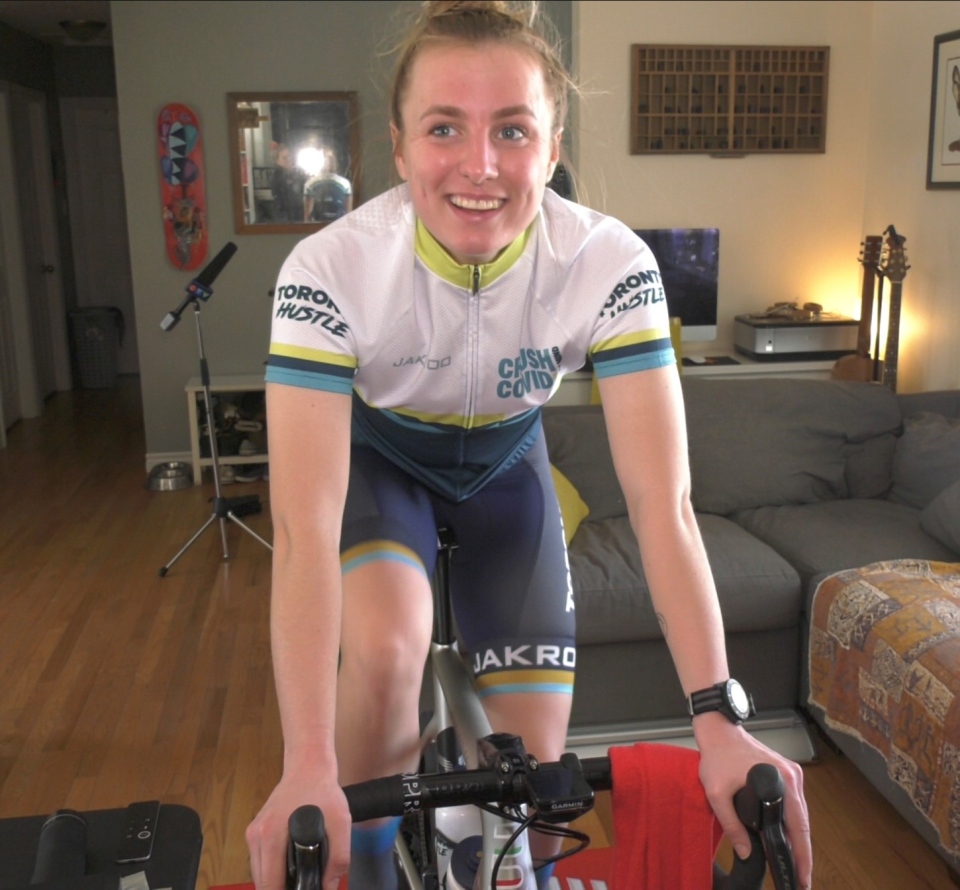 There is an added significance to her record attempt. She is raising money for CRUSH COVID: Ride for Mind, supporting Michael Garron Hospital in Toronto.

"I have struggled severely with my mental health, with depression and anxiety," Hempstead says. She began her athletic career as a competitive runner. She says that’s when her eating disorder developed.

"An eating disorder started to spiral out of control in the midst of balancing university and teenage life... the one thing I could control was how much I consumed and how I looked, and I thought that it reflected my talent. It got out of control and dangerous."

Hempstead says she struggled to get healthy and was burnt-out with running. But once she got into cycling, she says she is in a better mental health space and has found her love of sport again.

"I love that you can see such beautiful things when you are doing a sport that is so beautiful itself. It is an entirely new machine that you get to control other than yourself."

During the ride, Hempstead will be continually eating to keep up her energy. She has packages of energy gels, granola bars, electrolytes, and protein by her bike for the ride. She anticipates consuming 500 calories an hour and burning 12,000 calories for the entire ride.

"I have people staying up with me for the night shift, which means the world to me. I’ll be keeping my senses stimulated and reaching out and talking to people in different time zones and eating as much as I can!"