Alfredsson vs. Burris: next generation of Ottawa sports icons goes head-to-head on the ice 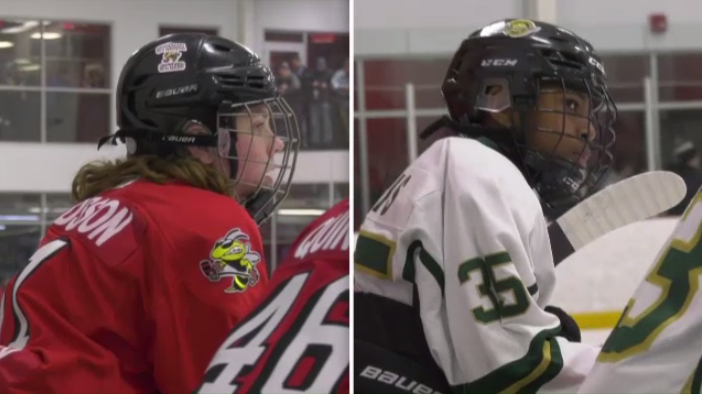 OTTAWA -- It's a minor league hockey showdown between age-old rivals, this time featuring two celebrity fathers and their sons.

By many – Daniel Alfredsson, better known as Alfie – is still considered the greatest Ottawa Senator to grace the ice.

He retired at age 41, but six years later he still can’t stay away from the game he and his son both love.

"It’s fun that he likes the sport I love and spent my whole career playing, so it’s fun to be able to teach him and his teammates,” Alfredsson said.

He transitioned from NHL player to coach of the Ottawa Sting minor hockey team.

Among the players is his teenage son Loui.

"It can be hard at times, the relationship, but it seems like it’s been a lot of fun to coach him. We worked it out pretty good,” Alfredsson said.

The no. 4 seeded Sting took on the no. 1 seeded Gloucester Rangers at Richcraft Sensplex Tuesday night.

It was a chance for two prominent Ottawa sports families to cross paths.

Similar to Loui, Armand Burris knows what it’s like to have a dad be a sports hero.

"We’re in the same situation playing hockey, being two hockey dads. I mean my dad’s not a coach, but he probably would if he could skate," Armand said.

For many, Henry Burris is an Ottawa hero after leading the REDBLACKS to a Grey Cup champion win in 2016.

Armand is following in his dad’s footsteps – different sport, but same competitive nature.

His mom said it’s pretty amazing to watch her son excel in a sport she and her husband aren’t overly familiar with.

"I need him to know that we support him in anything," Nicole Burris said.

"Henry, God love him, can’t skate, so you know it’s ironic that they’re so similar, as people."

The best-of-five semi-final series forced a game five. The Rangers won 2-1 and will face Rideau St. Lawrence Kings in the finals.

Despite the outcome, Alfie said he has no doubts in his son’s potential.

Regardless of the boys’ future when it comes to sport, both families said they just want to see their kids have fun.