Airport in St. John's, N.L., reopens after temporarily shut down for bomb threat 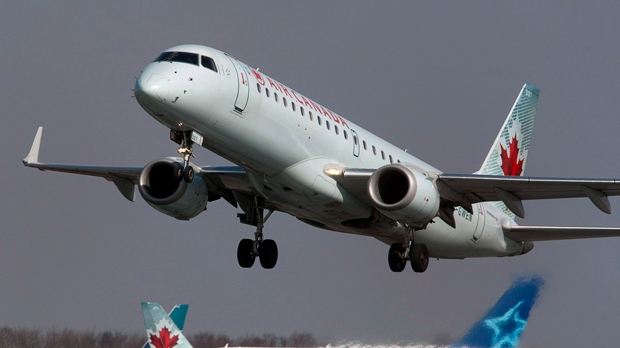 In this file photo, an Air Canada jet takes off from Halifax Stanfield International Airport in Enfield, N.S. on Thursday, March 8, 2012. (The Canadian Press/Andrew Vaughan)

ST. JOHN'S, N.L. -- Flights have resumed at St. John's International Airport after the airport was temporarily closed to air traffic because of a bomb threat on Thursday evening.

The airport authority said it took the action after Air Canada Flight 143 departing from St. John's to Ottawa was notified about a possible bomb on board at about 6:50 p.m. as the aircraft was pulling back from the gate.

The Embraer 190 jet carrying 82 passengers and four crew was brought back to the gate and all passengers departed safely.

Royal Newfoundland Constabulary spokesman Steve Curnew told reporters early Friday that the flight was about to leave when a note identified as a possible bomb threat was found in one of the plane's washrooms.

He could not offer much detail about the note, saying it's now part of physical evidence, but said three women who had used the washroom were questioned by police and released.

All three are residents of St. John's, Curnew said.

"The flight never moved. It was immediately evacuated."

The Royal Newfoundland Constabulary's explosives disposal unit and an RCMP bomb detecting dog were brought in to assist.

"A thorough search of the plane was conducted with nothing suspicious being identified on board," Curnew said.

There was mild applause from passengers when it was announced they could clear security for a Porter flight and check in for a WestJet flight. The announcement came just after 11:30 p.m. local time, almost five hours after the airport was notified of the threat.

The authority said the closure impacted a total of 13 arriving flights, including three aircraft that had already arrived but were held at a secure area of the airfield.

Spokeswoman Sara Norris said she didn't know how many people had been evacuated from the departure lounge.

During the wait, the cafeteria and bar on the airport's main floor were filled, along with seating areas, as delayed passengers waited for updates.

Jeremiah McCarthy of St. John's was to head to Dublin on a WestJet flight for his brother's wedding but the plane had been sent back to Halifax after the airport was shut down.

"It's frustrating," he said. "It's the waiting around."

McCarthy said the bright side is that his brother isn't getting married until July 1.

Soon after he spoke, a woman's voice on the public address system said the incident was still under investigation and normal airport operations had not been authorized.

"This has been a very long afternoon for all of us," she said just after 11 p.m. local time. "We do appreciate your understanding."

The airport authority said it called in its emergency response team, along with the RCMP, Royal Newfoundland Constabulary, St. John's fire department and the region's health authority.

Tao Chen of St. John's had been waiting to pick up his wife and 18-month-old son for more than four hours when operations at the airport resumed.

They had arrived just before 7:30 p.m. local time on an Air Canada flight from Toronto after taking a week's vacation, he said.

"They had water but not much food," he said of how passengers were kept on the tarmac while the bomb threat shut down traffic.

His wife was able to get some milk for their young son, he added.

Jennifer Tough of Edinburgh, Scotland, sat charging her phone in a wall socket and reading on her iPad. The digital marketing professional had been visiting family in St. John's and had hoped to head home Thursday.

Passengers had not been told of any bomb threat, she said, just that their plane had not arrived.

"I wish we knew more. I wish there was more communication."

Tough said the thought of a bomb threat was unsettling and she was glad officials were being cautious.